This year, GRIMMFEST, Manchester’s Festival of Horror, Cult and Fantastic Film celebrated  its thirteenth anniversary by evolving into hybrid form, running both a live event and then a virtual festival the week after. A welcome return to the cinema, after over a year of Pandemic-necessitated online only presentations, saw the festival running across two screens at regular venue, the Odeon Great Northern, Manchester, and offering a larger, wider variety of films than ever before, with over thirty features film premieres and four programmes of short films.

Which in turn meant more films than ever before eligible for this year’s “Grimm Reaper” festival awards.

This year’s awards have been sponsored by our friends at M2 MEDIA cinema post production services, a company that is actively helping independent feature films get financed.

Their task has not been an easy one and the festival team would like to thank them for their dedication, discernment and diplomacy. But the votes are all in, and Grimmfest is delighted to announce this year’s winners:

Special mention: claustrophobic alienation drama ALONE WITH YOU, for its unnerving, half-glimpsed, corner of the eye moments of creepiness and fracturing reality within the confined space of a New York apartment.

Special mention: Aaron Bartuska for his sulphurous study of a toxic relationship, FOR ROGER shot on MiniDV for 90s period authenticity.

Special mention: Pierre Tsigaridis for his striking use of light and shadow in TWO WITCHES.

Special mention: Jim Cummings and P.J. McCabe for their razor-sharp and riotously funny dialogue in the sourly satiric study of toxic male entitlement, and Hollywood ambition, THE BETA TEST.

Special mention: Brendan Sexton III in FACELESS, for never allowing the elaborate facial prosthetics to hamper the sympathy and humanity of his performance. 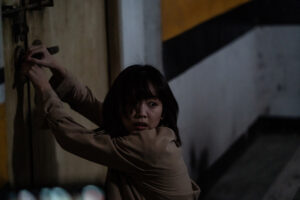 Special mention: Ki Joo Jin, for her subtle and sympathetic portrayal of a put upon young deaf woman stalked by a misogynist maniac in Korean thriller MIDNIGHT. 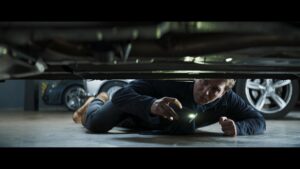 Special mention: Jane Schoenbrun for the daring reinvention of the desktop movie and the online conspiracy narrative in WE’RE ALL GOING TO THE WORLD’S FAIR

Special mention: THE SADNESS, Rob Tabbaz’s savage study of a society turned sexually insane in the wake of a pandemic infection.

PLUS the Grimmfest team present these honorary awards for 2021:

And finally, the Attendees had their say:

Special mention: NIGHT DRIVE, a genre-shuffling spin on classic film noir tropes, directed by Brad Baruh and Meghan Leon and Starring AJ Bowen and Sophie Dalah in which an LA taxi driver’s life is turned upside down after picking up a mysterious customer.

Worthy Winners every one!

Home of horror, cult and fantastic films, based in Manchester, UK. Monthly film screenings, events and the annual film festival in October, which is now listed as one of the top 30 genre film festivals internationally. Grimmfest presents Movie premieres, special filmmaker talks, celebrity guest speakers, a selection of genre classics and a plethora of special guests from talented directors to amazing actors. Now in its thirteenth year, it has quickly become one of the most prestigious fantastic film festivals in Europe. The festival takes place every October in Manchester, UK.

Trailers of Terror: “The Invisible Man”