UNDERNEATH is a grassroots, self-financed anthology in the vein of CREEPSHOW and is comprised of five chapters, an epilogue, and several mind-bending vignettes that are all bound together by something unnatural and sinister. 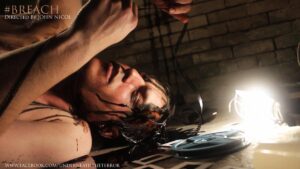 • BREACH (the vignette sequence): written & directed by John Nicol (CHANNEL ZERO). “An unstable individual who is convinced that ominous cracks in his basement may in fact be a breach into Hell itself… Is he in direct communication with demons, or has he opened a portal into their realm of terror? Poisoned by the revelation of five tales, he succumbs to the mental strain on his increasingly damaged mind.”

• CHAPTER #1…6 AM: written & directed by John Nicol (CHANNEL ZERO). “A family man is running out of a medication that keeps his otherworldly visions at bay. Day by day, visions of murder and demonic possession take hold as Daniel succumbs to a maddening revelation.”

• CHAPTER #3…PASSAGES: written & directed by John Nicol. “A has-been writer discovers that passages in his writing can cause intense visions of madness… and that he can inflict the visions upon others, and himself.”

• CHPATER #4…Certain Point Of View: written by John Nicol & directed by Cory Ivanchuk. “An experimental blast of demonic madness as seen through the eyes of those possessed.” 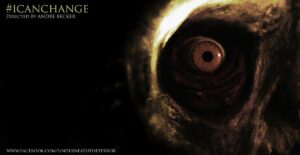 • CHAPTER #5…I Can Change: written & directed by Andre Becker. “A deranged young man is convinced he can transform into a demonic creature.”

• EPILOGUE…Entropy: written & directed by John Nicol. “Another experimental entry that wraps up the entire anthology – a haunting piece that seals the experience.” 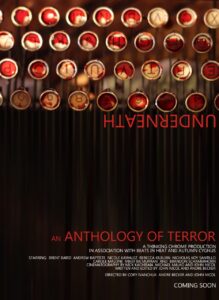 UNDERNEATH: An Anthology Of Terror is now complete and has begun a 2021/2022 film festival run. Since announcing the film’s completion, UNDERNEATH kick-started the festival circuit October 1, 2021…and it has already been submitted to a slew of festivals around the world: the Popcorn Frights FF, the Houston Horror FF, the Chicago Horror FF, the Horrible Imaginings FF, Montreal’s Requiem Fear Fest, and many more…

Additionally, we just launched an Indiegogo campaign for the now in pre-production sequel, UNDERNEATH: Beyond The Threshold…

Thinking Chrome Productions is a Toronto-based, independent film production outfit operated by John Nicol…John is the writer, producer, and director of the award winning feature, CHANNEL ZERO, and the award winning experimental horror short, GLIMPSE. UNDERNEATH: An Anthology Of Terror is his second feature for Thinking Chrome Productions. John Nicol is also knee-deep into pre-production on UNDERNEATH: Beyond The Threshold, the sequel to An Anthology Of Terror. John was a contributing writer for Fangoria Magazine & fangoria.com, Delirium Magazine, and ShockTillYouDrop.com.