Debuts Alongside the Work of French Auteur Jean Rollin & More

Jean Rollin: The Fantastique Collections, Nightmares and Scary Tales, Six Shooters vs Straight Razors, ΑΓΓΟΨY, Out of Your Element, A Place to Shop and a Place to Die

“A nightmarish modern fairy tale that is atmospheric and filled with scares.”

“a wild fever dream wrapped in an all-too-real nightmare. It is truly a film that sits with you.” — Nightmarish Conjurings

London, UK – Arrow Video is excited to announce the November 2021 lineup of their new subscription-based ARROW platform, available to subscribers in the US, Canada, the UK and Ireland.

The November lineup leads with the ARROW release of Michael Venus’ dream-based nightmare Sleep, available to subscribers in the US, Canada, the UK and Ireland. Richly conceived and confidently told, director Michael Venus draws influence from Mario Bava, David Lynch, Franz Kafka and the Brothers Grimm, but his voice is uniquely his own. As invested in substance and story as he is in style, Venus claws his way down to the roots of what haunts a people, a community, a nation and comes up screaming. The film will debut on ARROW November 1. 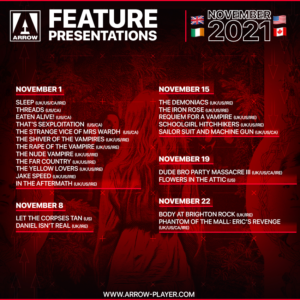 ARROW Stories will be home to a number of exclusive extras this November. Sleep includes a host of newly created extras including behind the scenes and festival featurettes. Phantom of the Mall: Eric’s Revenge will be presented in three different cuts of the film – the theatrical release, the censored TV version and the extended Integral Fan Cut.

Also launching on November 1 is Nightmares and Scary Tales. Just when you think the goblins and ghouls have retreated for another year, ARROW is bringing audiences into a world where a pleasant sleep and bad dreams collide. From deadly dreams to psychological chillers – and a selection of shadowy figures that send shivers down your spine – this is a collection guaranteed to keep you up at night.

Titles include: Sleep, Ringu, Dream Demon, The Snake Girl and the Silver-haired Witch, and Rude Awakenings.

November 5‘s Season goes to the Wild West with Six Shooters vs Straight Razors: a season where the Western takes on the Giallo in a posse of straight-shootin’ and slicing and slashing films focused on the work of actors and directors who have transcended both genres.

November 8 goes to the South of France with Let the Corpses Tan (US). Helene Cattet and Bruno Forzani’s adaptation of Jean-Patrick Manchette’s novel follows a grizzled thug and his gang as they head to an island retreat with a haul of 250 kilograms of gold bullion to lay low. However, a bohemian writer, his muse, and a pair of gendarmes further complicate things, as allegiances are put to the test.

November 15 concludes the Jean Rollin: The Fantastique Collection. The second half of the lineup sees hardened criminals meeting their match in an unexpected fashion, genre star Françoise Pascal lost in a cemetery, and brutish pirates all at sea in sexy, supernatural Rollin style.

Part 2 titles include: The Demoniacs, The Iron Rose, Schoolgirl Hitchhikers, and Requiem for a Vampire.

November 15 also debuts Shinji Somai’s genre-bending coming-of-age story Sailor Suit and Machine Gun (UK/US/CA). Hoshi Izumi is a young innocent forced to grow up quickly when her father dies and she finds herself next in line as the boss of a moribund yakuza clan. Wrenched from the security of her classroom and thrust into the heart of the criminal underworld, she must come to terms with the fact that her actions hold the key to the life or death of the men under her command as they come under fire from rival gangs.

Titles include: Dude Bro Party Massacre III, The Initiation, The Violent Years, and Sting of Death.

Just in time for Black Friday shoppers, November 22 releases Phantom of the Mall: Eric’s Revenge (UK/US/CA/IRE). One year after her high school sweetheart dies in a blaze, Melody is trying to move on with her life, taking up a job at the newly built Midwood Mall. But the mall, which stands on the very site of Eric’s former home, has an uninvited guest – a shadowy, scarred figure which haunts its airducts and subterranean passageways, hellbent on exacting vengeance on the mall’s crooked developers.

As the winter frost approaches, ARROW takes subscribers Out of Your Element into a selection of films that will force you to face the absolute worst of conditions and prove to all that you’re a subscriber who has what it takes to survive.

Titles include: The Wind, The Slayer, Stormy Monday, and The Chill Factor.

Tormented by recurring nightmares of a place she has never been, Marlene (Sandra Hueller, Requiem) cannot help but investigate when she discovers the place is real. Once there, she suffers a breakdown and is admitted to a psychiatric ward. Determined to discover what happened to her, Mona (Gro Swantje Kohlhof) her daughter, follows and finds herself in Stainbach, an idyllic village with a dark history/secret. What is it that so tormented her mother, and the people of Stainbach? What is the source of the nightmares she suffered? Who is the mysterious Trude that lives in the forest? 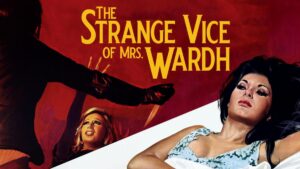 Edwige Fenech “at her most luminous” (Digitally Obsessed) stars as a diplomat’s unfaithful wife who finds herself hunted by a razor-wielding sex maniac while simultaneously haunted by her own depraved desires. Alberto de Mendoza (Horror Express), Cristina Airoldi (Torso) and Ivan Rassimov (Eaten Alive!) co-star in the “daring shocker that set the pace for years to come” (Mondo Digital). 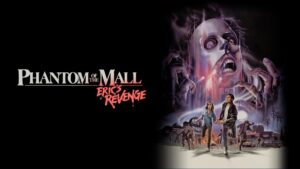