‘Hoodman’s’ Skye Roberts will appear in the HBO-MAX hit series ‘Doom Patrol’ in an expanded role. 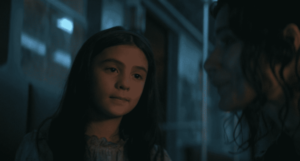 Since co-starring in the suspense thriller ‘Hoodman’ as Missy Chandler, Roberts has continued work on the groundbreaking series, which films entirely on location in Georgia.

“It’s been a non-stop thrill ride,” confides the young actress, “since ‘Hoodman’ opened I’ve gotten tons of compliments and interest. Everyone keeps telling me to do more horror!”

‘Doom Patrol’, part of the DC Comics universe, involves a team of traumatized and downtrodden superheroes, each of whom has suffered a horrible accident that gave them superhuman abilities. The cast includes April Bowlby, Brendan Fraser, and Matt Bomer.

Roberts, a series regular, saw her role developed further with the new season playing the character of Kay Challis, an alter ego of the lead character played by Diane Guerrero. But horror remains her first love.

“Playing Missy in Hoodman was tremendous fun” reveals the young actress, “Suspense and horror are my favorite genres and any time I get a chance to do them I’m thrilled.”

‘Hoodman’ streams on AmazonPrime and TUBI.