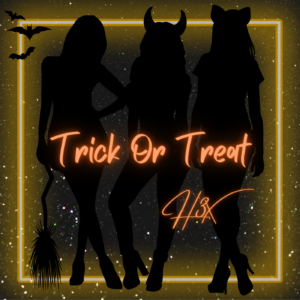 After two years of lockdown, girl pop group H3X, formed by Dani Thompson, Cheryl Neve and Megan Lockhurst, have released their electric new single “Trick or Treat”, along with its official music video directed by Brad Watson of Filmic Media

Inspired by Backstreet Boys’ “Everybody (Backstreet’s Back)” and Michael Jackson’s “Thriller”, the girls wanted to create a track which featured their favourite holiday, Halloween.

“I first came up with the song after a phone call to my bestie Dani Thompson, who’s well known within the horror industry. As we’ve both filmed our fair share of horrors, it just seemed fitting to create a song about Halloween,” said songwriter Megan Lockhurst. “We’d become close friends with Cheryl Neve after meeting on the set of the horror film “Mannequin” and had so many fun-filled lockdown adventures together that we decided to form girl band H3X.”

“The minute I heard this song, I knew it was special and couldn’t stop smiling,” said Dani.

“We loved the nostalgia and horror vibes captured within the video. The song has a great hook and strongmelodies that make you want to sing along and listen over and over again,” said Cheryl.

Link to the music video:

ONCE UPON A TIME AT CHRISTMAS – New Horror Out December 11th

‘A Simple Tale of Love’ Comes to the London Horror Festival