There is no better way to celebrate Halloween than with a horror movie, and so the team behind the new horror anthology Video Shop Tales of Terror felt it was the perfect time to release their new Indiegogo campaign 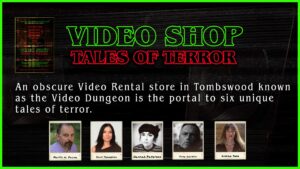 Video Shop Tales of Terror is a new horror anthology film which brings together some of the UK’s best indie horror filmmakers including; Alex Churchyard and Michael Holiday of TIS Films (I Scream on the Beach!/ Mosiac), Thomas lee Rutter of Carnie Films (Day of the Stranger / The Pocket Film of Superstitions), Mj Dixon of Myhco Entertainment (PandaMonium  / The Haunting of Molly Bannister), Sam Mason Bell of Trash Arts (Millennial Killer/ Acting), Michael Fausti of Fausti Films (Exit  /Dead Celebrities) and Andrew Elias of Ciao Handy (The Numbers / Tales From the Great War).

Video Shop Tales of Terror has been conceived by Singh Lall, the Curator of the Horror on Sea Video Club: “As a horror fan of a certain age, I have always had a soft spot for the 1980s and renting films on VHS. I have combined that nostalgia with my love of anthology horrors such as Creepshow and Freaky Fairy tales to develop Video shop tales of Terror. I have carefully selected 6 directors who share that nostalgic affection. Each Director brings their own unique style, and the project promises to be a truly eclectic mix.”

Synopsis: An obscure Video Rental store in Tombswood known as the Video Dungeon is the portal to six unique tales of terror.

The Film also has Pat Higgins (Powertool Cheerleaders vs the Boyband of the Screeching Dead), Geoff Harmer (Dead Air), Jamie Evans (Candy Hart and the Fire of Catalan), Mark Logan (Rats), Merlyn Robert (Room for Rent) and Tony Mardon (The Witches of the Sands) providing faux trailers which will play during the film.

There’s lots of perks to be had including becoming a producer on the film, light-up VHS cases, a poster by Simon Pritchard, t-shirts and more.

You can find out more about the Indiegogo campaign here: