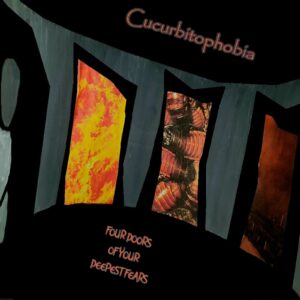 Just in time for Halloween, Four Doors Of Your Deepest Fears is a concept album involving a fictional haunted house which rests at the end of an amusement park.  Few people dare to tread past the gate into the house.  Even fewer have made it through the entire house without running out the way they entered.  But all who have entered, whether they’ve made it through to the end or not, were never the same again.

Each door within the haunted house portrays a reflection of a deepest, darkest fear within the mind of the individual.  From vivid imagery which depicts infernos of fire and lava, poisonous insects, vicious storms and floods, or a maze of mirrors reflecting the most unbearable parts of a person’s inner soul, Four Doors Of Your Deepest Fears represents the experience, the journey, and the darkest thoughts of one individual who has made it through the house ‘till the very end.

Four Doors Of Your Deepest Fears was influenced by horror and Halloween-themed film scores from the 70’s, 80’s, and 90’s along with industrial, dark ambient, neoclassical, atmospheric metal, and carnival music to serve as the musical framework.  An array of detuned guitars, ring-modulated synths, haunting reverberated pianos, menacing drum patterns, and bone-chilling samples make up the orchestration of the album.  It marks another chapter in CUCURBITOPHOBIA’s mission to keep the spirit of Samhain alive and kicking all year round.

CUCURBITOPHOBIA is a horror-themed one-person music project founded by musician Rob Benny – a native of the New York Metropolitan area and a lifelong student of music. Combining his love for Horror cinema with jarring, dissonant, atonal musical structures that he learned while studying 20th century music through college, he set out to produce experimental, cinematic instrumental music that spans multiple genres while consistently retaining common themes of horror, fantasy, mythology, folklore and the macabre.

Since 2018, eight CUCURBITOPHOBIA albums have been released, some of which have been well received and featured in various press sources throughout America and Europe. Four Doors Of Your Deepest Fears, set to be released worldwide on October 22, 2021, goes further down the dark hallway with a series of new tracks appropriately fitting for the Halloween season.

HALLOWEEN Toys from Fright-Rags for Halfway to Halloween