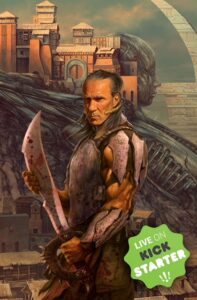 “Our first offering from Final Impact Comics is Rivals, a desolate violent world which Paul and I have built for over four years.” Mike Clarke. 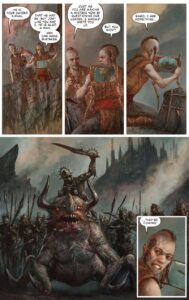 RIVALS depicts a wasteland full of warring warriors and violence. For which the KICKSTARTER campaign is live now.

Artists have been handpicked by Mike Clarke and Paul Gerrard, Gerrard is also a major contributor to all artwork – artists include Greg Staples, Dave Kendall , Björn Barends, Matthew John Soffe.

“Final Impact Comics will focus solely on content that’s dark, gritty, violent or has a high fantasy concept and that’s exactly what our first offering is, RIVALS is brutal,” Paul Gerrard.

Ostracised from his king and his family, warrior Sago Astar must do battle with his kingdom’s rivals to save the heir to the throne. The balance of power for the whole planet is at stake, and failure could lead to catastrophic events.

This is not an Earth-based world, it is a world of its own design, where each of the seven regions have given rise to monstrous characters. People fused with rocks and snakes, body horror bio-machines. Medieval warlords and cults. This is a brutal world. Fear and loathing of your Rival. The Dark Ages intermixed with splatterpunk body horror.

Set on a violent dystopic planet, called ALTER. A medieval world with post-apocalyptic overtones, the story revolves around the character Sago Astar – a fight trainer and guard to the leader of Jaan City, Sword Dorn Haath. Though it is a fortified emporium and the one true stronghold on planet Alter, Jaan City is under constant threat from the leaders of the planet’s other six large cities, including the Gokin – a biomechanical and weapon-fused race, and the Dark Mizus amongst many other horrors. Rivals is a new action-packed and epic saga to rival all others. Prepare for war and adventure, for it is coming in droves.

WHO WILL LIKE THIS?
If you like Conan The Barbarian , Mad Max, Warrior, Fist of the North Star, The Witcher, Vikings. You are going to love this!

‘The Girl in the Cornfield 2’ to premiere at Bow Tie Cinemas in Red Bank on Jan. 7