Gothic/Post-Punk band CYBORG AMOK has just unveiled their new video for the song, “Burden Away.” The song appears on CYBORG AMOK‘s self-titled album.

Greg Bullock (synths/vocals) says about the song: “Burden Away” was one of those songs that came together start to finish in a few hours one afternoon. I recorded all of the music and vocals. We felt that “Burden Away” best represented the direction CYBORG AMOK is going in. So, it was chosen for the video. We let Nick and Pete at Howl Peak depict the song as they interpreted it for themselves.

As for CYBORG AMOK, we prefer to allow the audience to find their own meaning in our music.”

For fans of: goth, industrial, post-punk 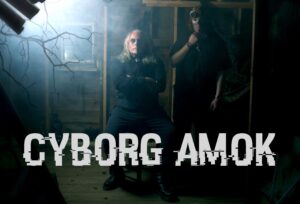 “Cyborg Amok resides somewhere between the brilliance of twilight and the apocalyptic darkness. Their gothic infused synth-rock sound delivers the listener to a panorama of synthetic waves, twisted organic tones and a slightly pop crust … the language angels speak in the darkness.”

Greg Bullock, poet and synthesis, formerly the keyboardist for RealEyes and Shamen, currently splits time between CYBORG AMOK and The Antoine Poncelet Band. As the principal songwriter and voice of CYBORG AMOK, Greg continues his journey suspended in dark waves crashing over striking landscapes.

Brydon Bullock emerges as an up and coming drummer on the local music scene. He has performed with Rockit Live in NYC and on the Jersey Shore. Brydon adds a contemporary element to the CYBORG AMOK landscape with solid grooves and strong backing vocals.

On June 12, 2021 CYBORG AMOK‘s self-titled album was released as a digital album as well as a hardcopy CD. The album is a compilation of two previous EPs that are now extinct.