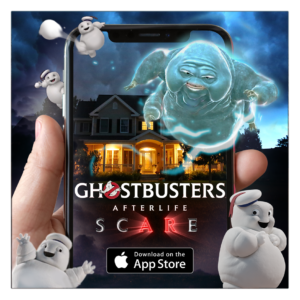 Ghostbusters: Afterlife ScARe sets users in Sony Pictures’ upcoming film Ghostbusters: Afterlife. In the experience, players seek to defend their surroundings amid an oncoming apocalypse. Character interactions relay hidden clues which unlock unlicensed nuclear equipment to battle supernatural entities. Banding together with newfound friends, users wage a high-tech battle against evil to overcome a town’s hidden past in order to save the day.

“I’m always interested in new ways to tell stories and I’m thrilled to see the Ghostbusters mythology expand into the augmented reality front. Ghostbusters: Afterlife has always been about the Ghostbuster in all of us that wants to pick up the proton pack and this is a chance for fans of the new film to join Phoebe and the gang for a new adventure” said co-writer and director Jason Reitman.

Finn Wolfhard, McKenna Grace, Celeste O’Connor, Logan Kim and Dan Aykroyd reprise their roles from Ghostbusters: Afterlife and provide guidance throughout the playing experience. Master magician, writer, and producer, David Kwong, crafted the interactive in-game elements. Kwong has built a reputation for developing intricate puzzles and illusions for such films as Now You See Me, The Imitation Game and Mission Impossible: Ghost Protocol.

The first two episodes of gameplay will be available for free beginning November 19. Additional episodes will be available for purchase, including new episodes scheduled for release in the months after launch. Imprezario CEO and the game’s director, Brett Tomberlin, adds, “All episodes will incorporate the most convincing level of AR content, it is our hope we offer a generation of both past and future Ghostbusters a gateway to another dimension.”

The band, The Flux Capacitors, will be re-recording a new rendition of Rockwell’s “Somebody’s Watching Me” which will be featured in one of the first episodes in the ScARe experience.

From director Jason Reitman and producer Ivan Reitman, Ghostbusters: Afterlife will debut exclusively in movie theaters on November 19 via Sony Pictures.  The film is written by Gil Kenan and Jason Reitman.

Imprezario is an innovative entertainment studio that develops, produces and delivers premium augmented reality content. Its goal is to captivate and engage audiences through mobile AR experiences. Founded by Brett Tomberlin, the company incorporates immersive storylines and cutting edge technology. The Imprezario team taps the zeitgeist to discover intriguing content. Whether it is a classic tale re-crafted through unique storylines and technology or a new idea on the horizon, Imprezario’s content innovates, challenges and engages people in new ways. For more information, visit www.ImprezarioEntertainment.com

From director Jason Reitman and producer Ivan Reitman comes the next chapter in the original Ghostbusters universe. In Ghostbusters: Afterlife, when a single mom and her two kids arrive in a small town, they begin to discover their connection to the original ghostbusters and the secret legacy their grandfather left behind. The film is written by Gil Kenan & Jason Reitman.