Eva (Eugénie Derouand, Paris Police 1900) has been paraplegic for the past three years. When her birthday arrives, she receives a strange advent calendar as a gift. But instead of the traditional sweets, every day reveals something different; sometimes pleasant but often terrifying, andincreasingly bloody. It’s going to be a very deadly Christmas this year. Written and directed byPatrick Ridremont.

A group of battle-weary guns for hire are commissioned to rescue an imprisoned scientist from a secret Cold War bunker. Upon entering the facility, they find themselves in a fight for survival when they come under attack from a terrifying creature of unknown origin. Written and directed by Matthew Ninaber (PG: Psycho Goreman). Starring Jeremy Ninaber (Escape the Dark),Ethan Mitchell (Escape the Dark) and Kristen Kaster (If I Should Die).

Behind the Monsters –Season Finale on December 1 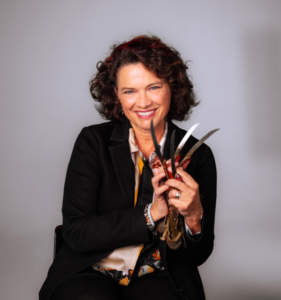 Behind the Monsters takes an in-depth exploration of the creation of favorite horror icons including Candyman, Chucky, Michael Myers and Freddy Krueger. No horror icon came out of afilmmaker’s first draft fully formed. There were early drafts, wrong turns, experimentation. Once made flesh (or latex), there’s presentation, impact, audience response and legacy. The final episode explores the iconic character of Pinhead. When Clive Barker wrote ‘The Hellbound Heart’, he never imagined the character he penned as “Lead Cenobite”, would go on to the become the horrific and undeniable symbol of pleasure and pain and thanks in large part to childhood friend Doug Bradley, the icon of the Hellraiser film franchise. With a reboot and an upcoming series in the works, this seductive super masochist from hell who will literally tear your soul apart continues to fascinate and enthrall us.

(Available on Shudder US, Shudder CA) 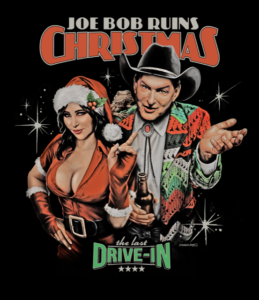 Iconic horror host and foremost drive-in movie critic Joe Bob Briggs returns with a new The Last Drive-In double feature just in time for Christmas, premiering live on the Shudder TV feed. In what has become an annual holiday tradition, the new special will feature a telethon and charity auction of one-of-a-kind props from The Last Drive-In and personal memorabilia from Joe Bob’s 35-year career. The details of this year’s items, charities and films will be revealed during the special. (Also available on demand beginning December 19.)

The “Ghoul Log” is back with a special holiday edition, combining a traditional Yule Log with Shudder’s own Christmas “Ghoul Log,” wishing all of Shudder’s members a very spooky Christmas and a scary New Year.

• Mill of the Stone Women

In 19th century Holland, a professor of fine arts and an unlicensed surgeon run a secret lab where the professor’s ill daughter receives blood-transfusions from kidnapped female victims who posthumously become macabre art.

• To All A Good Night

A group of teenagers at a party find themselves being stalked by a maniacal killer in a Santa Claus costume.

• Brotherhood of the Wolf

In 18th-century France, the Chevalier de Fronsac and his Native American friend Mani are sent to the Gevaudan province at the king’s behest to investigate the killings of hundreds by a mysterious beast.

An associate burns down a wax museum with the owner inside, but he survives only to become vengeful and murderous.

A group of teens are unwittingly stranded near a strange wax museum and soon must fight to survive and keep from becoming the next exhibit.

The comatose Ricky Caldwell reawakens and begins to stalk a blind woman, with whom he shares a psychic connection.

A reporter investigating the bizarre death of a woman who leaped from a building in flames finds herself mixed up in a cult of witches who are making her part of their sacrificial ceremony during the Christmas season.

An elderly toymaker and his son make killer toys designed to kill their customers, children.

• Screams of a Winter Night

An anthology in which a group of college coeds spending a winter’s night in a remote cabin pass time by telling scary stories to each other.

After five deranged children are involved in a bus wreck, they start killing people at the lodge who insulted them or were rude to them.

In this gem of drive-in terror, a snake lover sends out venomous snakes and reptiles to kill his enemies.

The leader of an inner-city girl gang is challenged when a new girl moves into the neighborhood.

In this twisted cult horror-comedy, deranged siblings torment unfortunate visitors. Elizabeth, Virginia and Ralph all suffer from Merrye’s Syndrome, which causes them to regress to a state of “pre-human savagery and cannibalism.” Normally, they’re kept in line by their chauffeur, but when he steps out, things turn terrifying.

• Hail to the Deadites

A documentary about the fans of the Evil Dead films that explores the classic franchise’s undying and ever-growing popularity.

• All the Colors of Giallo

‘Giallo’ is Italian for ‘yellow’, the color of the lurid pulp novels that inspired one of the most intense, extreme and influential genres in movie history. In this unprecedented documentary, experience the evolution of giallo through interviews with the masters of the form, including Dario Argento, Lucio Fulci, Umberto Lenzi, Sergio Martino, Daria Nicolodi and many more

As a thirteen-year-old, Martha Caldwell witnessed the death of her parents in a terrible railway accident. Barely surviving the tragedy herself, Martha was struck dumb due to the shock. Now an adult, the still mute Martha lives with her uncle Ralph in the Spanish countryside. Martha’s cousin Jenny arrives to be with the family but is quickly stabbed to death. It appears that a sex maniac is roaming the countryside, killing pretty, young girls.

The already traumatized Martha seems likely to be the next victim, but the case turns out to be far more complicated than it would first seem.

• So Sweet So Perverse

Jean, a rich Parisian socialite, comes to the aid of a frightened young woman who is under the domineering control of her abusive boyfriend, Klaus. Although married, Jean develops a romantic relationship with Nicole. However, he may have gotten himself involved in more than he bargained for.

• A Quiet Place to Kill

A racecar driver whose life is in a rapid downfall is invited by her ex-husband’s new wife to stay at their plush estate. The two women form a bond, and it’s not long before their mutual dislike for the husband culminates into a plan to kill him. As it turns out, though, they’re not alone in plotting murder.

• All The Creatures Were Stirring

Ho, ho, no! The joyful spirit of the holidays is about to take one dark turn after another. From sadistic office parties and last-minute shopping nightmares to vengeful stalkers and immortal demons, there’s plenty out there to keep you from getting out of bed to see what’s under the tree this holiday season.

In this intimate exploration of identity, trauma and power, a young woman seeks out her birth mother, inadvertently triggering a string of events which change both of their lives.

• My Heart Can’t Beat Unless You Tell It To

(Available on Shudder US and Shudder UKI)

Two mysterious siblings find themselves at odds over care for their frail and sickly younger brother.