TO THEATERS ACROSS NORTH AMERICA

Based on the hit picture book by Akihiro Nishino 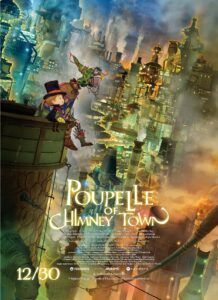 Eleven Arts, the Los Angeles-based distribution company known for bringing high-quality Japanese animation from world-renowned studios to North America, announced today it will release the breathtakingly beautiful and moving feature-length animated film Poupelle of Chimney Town in cinemas nationwide starting December 30, 2021. Poupelle of Chimney Town, created at Tokyo’s renowned STUDIO4ºC and directed by Yusuke Hirota, is based on the bestselling picture book and screenplay by internationally known Japanese comedian and illustrator Akihiro Nishino. Poupelle of Chimney Town made its English World Premiere at the Animation Is Film Festival in Los Angeles. Eleven Arts will qualify the film for 2021 awards consideration and release the film theatrically in English and in Japanese.

“We are very proud to bring Poupelle of Chimney Town to North American audiences. It’s an incredibly impactful animated feature that audiences will relate to and be deeply moved by,” said Ko Mori, CEO of Eleven Arts.

Poupelle of Chimney Town was an Official Selection at this year’s Annecy International Animation Film Festival and Fantasia Film Festival. It won the Japan Academy Film Prize for Animation of the Year and has been screened at film festivals around the world, including at Rotterdam (spotlighted at its Closing Ceremony), Fantastic Fest, Sitges and Spark.

Poupelle of Chimney Town is the story of young Lubicchi living among the thick smoke from the chimneys of his isolated town, yearning to see the “stars” — to know the truth — his father always told him about. One Halloween night he meets Poupelle, a man made of garbage, and together they look to the sky as their adventure begins. Spectacularly beautiful, filled with inspiring performances and splendid music and sound effects, and produced at Tokyo’s famed STUDIO4ºC, Poupelle of Chimney Town brings laughter, tears and joy.

Director Yusuke Hirota served as STUDIO4°C’s computer graphics director first on the TV series Piroppo (2001, directed by Katsuhito Ishii) and then on many titles including the Animatrix – BEYOND (2003), Genius Party – BABY BLUE (2007), Genius Party Beyond – MOONDRIVE (2008), Berserk The Golden Age Arc 1 – The Egg of The King and Harmony (2015) for which he is also the co-director. Poupelle of Chimney Town (2020) is his directorial debut.

Multi-medium artist, comedian and picture book author Akihiro Nishino formed the comic duo King Kong with Yuta Kajiwara in 1999. In addition to his work as a comedian, he has authored many bestselling picture books and books on business strategy. He is the creator and operator of the popular members-only premium online creative networking community “Akihiro Nishino Entertainment Laboratory” (https://salon.jp/nishino), the largest of its kind in Japan. His global hit picture book Poupelle of Chimney Town is a bestseller in Japan and now an award-winning feature film.

STUDIO4ºC is a Tokyo, Japan-based animation production company that has earned worldwide acclaim for its high-quality visual expression. Under the leadership of founder, president and producer Eiko Tanaka, STUDIO4ºC has produced a wide variety of films, emphasizing the individuality of film work and constantly exploring and pushing the boundaries of the possibilities of visual expression.

Early STUDIO4ºC productions include Memoirs (1995), directed by Katsuhiro Otomo, Princess Arete (2001), directed by Sunao Katabuchi, The Animatrix (2003) and Mind Game (2004), directed by Masaaki Yuasa, which won the Grand Prize in the Animation Division of the Japan Media Arts Festival. STUDIO4ºC grew its portfolio, often surprising the world of animation with works such as Genius Party (2007), Berserk: The Golden Age Arc Trilogy (2012, 2013), Harmony (2003), Muthafuckas (2006) and the award-winning Children of the Sea (2019).

Passes Now on Sale for The 2018 Horrible Imaginings Film Festival!