My Stepmother Is An Alien

Arrow closes 2021 out with two new must-own box sets and a late eighties sci-fi comedy. The party starts on December 7 with Giallo Essentials [Yellow Edition]. Arrow continues to celebrate Italian cult cinema with three more black-gloved thrillers, all remastered in stunning 2K restorations from the original camera negatives. Set includes Sergio Martino’s Torso, Andrea Bianchi’s Strip Nude for Your Killer, and Massimo Dallamano’s What Have They Done to Your Daughters? The 3-disc set represents the best of what giallo has to offer, from psychosexual disorders to motorcycle-rider killers and everything in between. 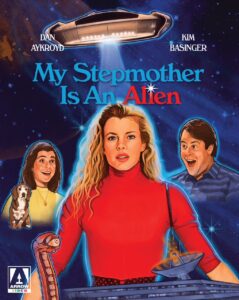 On December 14, Arrow takes a more light-hearted approach with the release of Richard Benjamin’s sci-fi/comedy, My Stepmother Is an Alien. Kim Basinger stars as an alien sent to Earth on a secret mission to seduce a single father (Dan Aykroyd) that has accidentally disrupted her planet’s gravity. The film was a box-office bombed and panned by critics upon its initial release but has gained cult status in recent years with fans praising the performances of Basinger and Jon Lovitz. Young future Buffy stars Alyson Hannigan and Seth Green co-star. The Arrow release features a brand new 2K restoration from the original camera negative and a new interview with Benjamin.

Also releasing on December 28 is Shawscope Volume One. This 10-disc mega-box set containing 8 blu-rays and 2 CDs, is not only the most anticipated release of the year but is arguably one of the most anticipated releases since blu-ray first launched as a format in 2006. Shaw Brothers Studios officially originated in 1958 as the successor to the Tianyi Film Company. Under the leadership of Run Run Shaw, the company popularized kung fu films and launched many careers of some of Hong Kong’s biggest stars. The studio’s films have had a lasting impact, going on to influence the likes of Quentin Tarantino and the Wu-Tang Clan. With the release of Shawscope Volume One, Arrow looks to shine a much-deserved light on 12 kung fu classics from the Godfathers of Hong Kong Cinema.

Boxer from Shantung follows a poverty-stricken fighter (Chen Kuan-tai) that heads to Shanghai with hopes of finding a life of luxury. Instead, he gets caught up in a world of corruption and gang warfare, forcing him to rely on his unique fighting style to survive. A young John Woo served as assistant director.

After the destruction of the Shaolin Temple, five students seek vengeance by mastering their own individual fighting styles in Five Shaolin Masters. Known in some regions as 5 Masters of Death, this bonafide kung fu classic was directed by Chang Cheh and features action choreography from Lau Kar Leung and Lau Kar Wing.

The Shaolin Temple stands as the lone place capable of resisting and defeating the Qing Dynasty. With the Qings determined to exterminate the Shaolin, the temple realizes they must quickly train more fighters in their obscure style in order to protect the ways of the Shaolin.

Looking to capitalize on the 1976 King Kong remake, the Shaw Brothers took a stab at the giant ape genre with The Mighty Peking Man. Hailed by Film School Rejects as “a true work of genius” and awarded three-out-four stars by Roger Ebert for “general goofiness,” The Mighty Peking Man is a one-of-a-kind film certain to thrill all audiences.

In Challenge of the Masters, a young Gordon Liu stars as a teenager that is constantly beaten by students at a rival school. Desperate to be trained by a father that refuses to do so, the teen sets out to learn from his father’s teacher and avenge those that have wronged both him and his school.

Chang Cheh’s Five Venoms, also known as Five Deadly Venoms, is one of the most famous kung fu films ever made. A dying martial arts teacher instructs his five last students to track down the previous five and defeat any that are evil. The film’s cultural impact stretches wide, being referenced in Kim’s Convenience, Kill Bill, and by rappers 2Pac and the Wu-Tang Clan.

In Cheh’s Crippled Avengers, four men are brutally injured by martial arts master Chu Twin (Chen Kuan Tai) and his son, Chu Cho Chang (Lu Feng). The four men, now each suffering from a different disability, join forces to train and get revenge on the men that crippled them.

Gordon Liu stars as Chinese kung fu student Ho Tao in Heroes of the East. After an arranged marriage to a Japanese woman, he inadvertently insults her family in an argument over which country has the better martial arts style. To prove himself, Ho must square off with seven of Japan’s top martial artists. Heroes of the East is notable for portraying Japanese martial artists as heroes alongside the more traditional kung fu fighters from the Hong Kong movies of the day.

Unlike most Shaw Brothers’ productions, Dirty Ho trades in the revenge plot and instead delivers the story of a prince posing as a jeweler that hires a thief to protect him from those attempting to assassinate him and take his throne. This martial arts comedy reunites Gordon Liu with The 36th Chamber of Shaolin director, Lau Kar-leung.

This limited-edition set includes hours of bonus content including new and archived interviews, newly commissioned artwork for each film, and a 60-page booklet with writing on the films, including cast and crew info and trivia. This is the first of multiple Shawscope volumes Arrow plans to release in the future.

PopHorror XI: I Still, Still Know What You Did Donna Summer – Disco’s Revenge