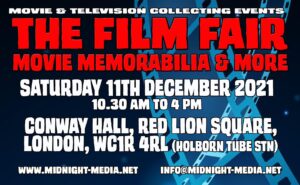 The guest line-up for this show includes:

You can find out more about The Film Fair on the Website: www.midnight-media.net  and following social media: