“Fans of paranormal horror films will love this, we were inspired by The Ring.”

Fans of The Ring, Paranormal Activity and The Conjuring will be celebrating when SURROGATE hits screens in 2022.

“My favourite horror films are great pieces of drama then add the scares, such as The Ring, The Others and The Exorcist, all which influenced Surrogate” says Director David Willing.

The practical effects used on Surrogate are sure to make an impression on horror audiences with one effect for the ‘Blood Rush’ scene making onset crew members physically ill.

“Our film will terrify audiences, but also give them characters they care about, good films build great characters that audiences can relate to and care about – this makes the horror that much more effective,” Director David Willing.

Surrogate will be hitting screens in Australia and internationally in 2022 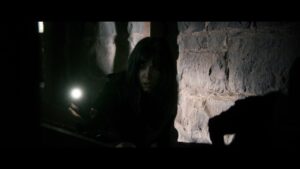