RLJE Films, a business unit of AMC Networks, will release the critically acclaimed horror film The Djinn on DVD and Blu-ray on January 4, 2022. IFC Midnight released The Djinn in theaters, on Digital Rental & VOD on May 14, 2021.

The Djinn is co-written and co-directed by David Charbonier (The Boy Behind The Door) and Justin Powell (The Boy Behind The Door).  The film stars Ezra Dewey (“Criminal Minds”), Rob Brownstein (“The Young and the Restless”), Tevy Poe (Redwood Massacre: Annihilation), Donald Pitts (“The Secrets We Keep”) and  John Erickson (Sexually Frank).  RLJE Films will release The Djinn on DVD for an SRP of $27.97 and on Blu-ray for an SRP of $28.96.

Mute boy, Dylan (Ezra Dewey) finds a book of spells in the closet when he is left home alone in their new apartment by his father (Rob Brownstein) to work the night shift. Blaming himself for the recent death of his mother, Dylan summons a djinn to grant one wish. Now he must survive a night of sheer terror at the hands of the sinister creature to fulfill his heart’s greatest desire. 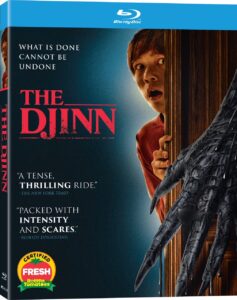 Established in 2000 and based in New York City, IFC Films is a leading U.S. distributor of independent film. Its unique distribution model makes independent films available to a national audience by releasing them in theaters as well as on cable’s Video On Demand (VOD) and digital platforms.

New Series Achilles Inc. has Super Powers, But No Heroes