STOP-MOTION PRODUCTION IS ALL CONSUMING DURING 2020 HORROR LOCKDOWN!

SPAZM FILMS PRESENTS: ALL CONSUMED, a Stop-Motion Animation Short which will be premiering at Horror-on-Sea Film Festival on Saturday 22nd January at 3pm 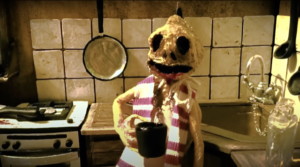 ALL CONSUMED is the first stop-motion animation by independent film-maker Debbie Lane, created during the initial lockdown period of 2020. Having had her first short film screened at the Horror-on-Sea festival 2020 (The Rhythm, 2019), Debbie decided to try her hand at animation for her second submission. “I was inspired by one of the 2020 festival films’ puppets and thought it would be an interesting project to try to create a film using solely hand-made puppets and sets.” Debbie continues, “As it turns out, it was an ideal project to work on over lockdown as it basically required me to spend hours upon hours on my own making tiny little chairs, shelving units, cookers, kitchen utensils, and other household objects!”. The film was produced on a minimal budget, using mainly materials found around the house or garage, with a few specialist items purchased. In total, the film took four months to complete from start to finish.

ALL CONSUMED is a cute, but slightly gross, horror which follows the mundane life of a lonely little monster named Noodle, whose love of painting is only outweighed by her desire to be ‘normal’. One day she accidentally comes across a solution that could help her with both. All set design, puppets, production, storyline, animation, audio, and editing has been done by Debbie Lane, but with an original music score from her artist and musician brother, Adrian Lane. This unique score massively helps bring the whole film to life and guides you through the emotions and set-backs faced by lonely little Noodle!

Official Trailer and Poster For DREAMLAND by Bruce McDonald