Exclusive Reversible Board Only on Kickstarter: bit.ly/SNDNgame 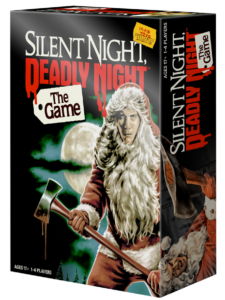 The producers of Silent Night, Deadly Night have teamed up with horror merch stalwart Fright-Rags to create a tabletop game based on the 1984 Christmas slasher classic. It’s available to pre-order through Kickstarter.

Working as a team, 1-4 players will need strategy, bravery, and a little luck to stop murderous Santa Billy from reaching St. Mary’s Home for Orphaned Children! Roll the dice and make your move while Billy stalks along his path. Collect weapons, roadblocks, and snowballs to help your fight — and when that time comes, flick the spinner to determine your fate!

The board features five “kill zones” with new illustrations by Justin Osbourn, which will be revealed throughout the campaign. A deck of 30 action cards guarantees each game is unique, while a reversible board with a “naughty” drinking game version is available exclusively on Kickstarter.

“Over the last decade, the market for Silent Night, Deadly Night merchandise has exploded, meaning fans are still celebrating the film all these years later,” says executive producer Scott Schneid. “Adding a board game to the SNDN merch-verse is the perfect way for fans to experience the film in a new way.”

Schneid and fellow executive producer Dennis Whitehead are producing a 2022 reboot of the film alongside Anthony Mas, who led the design of the game. “It’s easy to learn, quick to play, and different each time you play,” notes Masi. “The Kickstarter features the exclusive ‘Naughty & Nice’ version, which offers a really fun spin on how the game is played.”

Fright-Rags founder Ben Scrivens adds, “I was really excited when the SNDN team approached us about working together on the board game, as we had already been thinking of entering that space. Anthony’s concept was already solid, so we had fun discussing all the different design elements and ways to make it even more fun and unique.”

Avoid being pushed by backing Silent Night, Deadly Night: The Game on Kickstarter before the campaign ends on January 13: https://www.kickstarter.com/projects/sndn/silent-night-deadly-night-the-game

Official Selections for the 2019 Fixion Fest