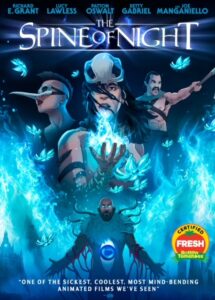 “one of the sickest, coolest, most mind-bending animated films we’ve seen” – io9

RLJE Films, a business unit of AMC Networks, and Shudder, AMC Networks’ premium service for horror, thriller and the supernatural, will release the horror THE SPINE OF NIGHT on DVD, Blu-ray and 4K UHD DVD/Blu-ray SteelBook® on February 1, 2022.

THE SPINE OF NIGHT stars an all-star cast of Richard E. Grant (Can You Ever Forgive Me?), Lucy Lawless (“Xena: Warrior Princess”), Patton Oswalt (Young Adult), Betty Gabriel (Get Out) and Joe Manganiello (“True Blood”). The film was co-written and co-directed by Philip Gelatt andMorgan Galen King. The DVD will be available for an SRP of $27.97, the Blu-ray for an SRP of $28.96 and the 4K UHD DVD/Blu-ray SteelBook® for an SRP of $35.97.

This epic fantasy tale, about the history of a land that never was, begins when an ambitious young man steals forbidden knowledge from a sacred plant. He falls to its darker temptations and in so doing, unleashes ages of suffering onto mankind. As his power grows over the years, it falls to people of different ilk and culture to attempt to stop him. Among those who stand against him are a daring tomb-robber, star-crossed lovers, a maniacal necromancer, winged assassins, and an undying guardian.

THE SPINE OF NIGHT DVD

THE SPINE OF NIGHT Blu-ray

Posters and Trailer Revealed for “The Devil’s Tail”