Written and Directed by Isaac Rodriguez, who also produced alongside Cynthia Bergen, LAST RADIO CALL centers around Officer David Serling, who went missing inside the abandoned Yorktown Memorial Hospital. One year later, his wife has hired a film crew to help bring light on what really happened that night. Using recovered body cam footage, she discovers a dark secret that sends her spiraling down a horrific path of ancient evil. She must now face an unknown terror to find the answers she desperately seeks. Starring Sarah Froelich, Jason Scarbough, June Griffin Garcia, Ali Alkhafaji, KeeKee Takatsuki, Bert Lopez, and Makayla Rodriguez, the film will be available across digital and VOD platforms January 21st, one week after it debuts on the Terror Films Channel. 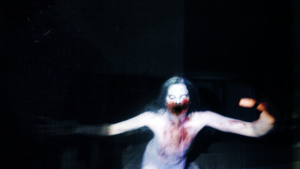 -PH: Where abouts in the world do we find you at the moment, sir?

-PH: And how has the pandemic treated you?

-Isaac: It’s been a wild ride but I think people are starting to adapt. I mostly work from home, so I’ve been fortunate.

-PH: Did it affect your work at all—?

-Isaac: Not really. I work mostly from home and when we shoot, we have a very small crew, so I wasn’t effected too much.

-PH: When did you shoot “Radio” – and was it affected it all by the coronavirus situation?

-Isaac: Not really. They vaccines had come out before we shot so everyone was protected. Of course, later on, things picked up again.

-PH: Perfect film to release right now, with so many people still at home. Is it releasing only in North America? Or has it been released elsewhere, too?

-Isaac: It will be released worldwide on several digital platforms.

-PH: Tell me about the process in getting distributed. How did that work?

-Isaac: I contacted Joe Dain on Facebook. I saw he had horror distribution company and I thought it would be a good fit. I sent him the film and they loved it.

-PH: What do you think the film has that others don’t – something that might spur readers to give it a look?

-Isaac: I think the constant dread and the setting of the decaying Yorktown Hospital is a perfect mix of horror that many people will love.

-PH: The industry has changed even more over the past eighteen months. What’s going to happen, you think? Is the theatrical experience a thing of the past and are streamers where we’ll be getting all our entertainment from going forward?

-Isaac: Streaming is definitely where it’s at right now. We have giant blockbuster films being released straight to streaming platforms now.