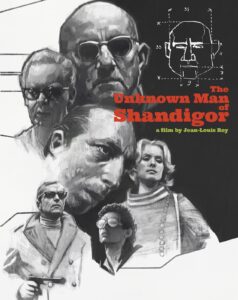 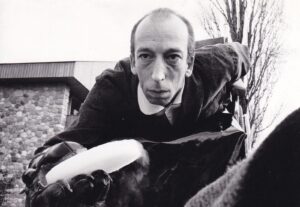 THE UNKNOWN MAN OF SHANDIGOR (1967, 90 min.) is a marvelous and surreal hall of mirrors, part-DR. STRANGELOVE, part-ALPHAVILLE, with sly nods to British TV shows like “THE AVENGERS” and “DOCTOR WHO.” The film stars a who’s who of great 60s European character actors starting with the unforgettable Daniel Emilfork (THE CITY OF LOST CHILDREN, THE DEVIL’S NIGHTMARE) as crazed scientist Herbert Von Krantz, who’s invented a device to “sterilize” all nuclear weapons. A mad herd of rival spies are desperate to get their hands on the device, including legendary French singer Serge Gainsbourg as the leader of a sect of bald, turtleneck-wearing assassins, and Jess Franco veteran Howard Vernon (THE AWFUL DR. ORLOF).  Gainsbourg’s deranged jazz-lounge song, “Bye Bye Mr. Spy”— performed by him on funeral parlor organ, no less— is arguably the film’s high point. “An accomplished spy is at the same time psychologist, artist, funambulist, conjurer,” to quote one of the film’s characters, and the same could be said of Roy’s exotic camera obscura of B&W Cold War paranoia. (In Swiss French with English subtitles.) 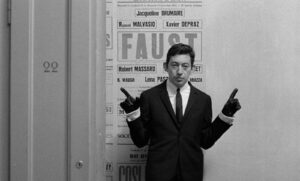 “Our father was always fascinated by the United States and the creativity of its artists. Their influence on him was significant. Besides the genius of directors such as Alfred Hitchcock or Orson Welles, he was also captivated by the American society, so different in some ways from old Europe,” states the director’s son, Michael Roy. “Deaf Crocodile Films can’t do a better tribute to him than to distribute THE UNKNOWN MAN OF SHANDIGOR in America… and around the world!”

Christian Roy, son of the director, continues “With THE UNKNOWN MAN OF SHANDIGOR and its strange atmosphere in the dark, my father taught me a lot about cinema, but also about life. I am happy that this film, 55 years after its release, still arouses interest. It is a nice reward for all the passion, as well as all the efforts that were necessary to make this work exist.”

“THE UNKNOWN MAN OF SHANDIGOR has been high on my wish list of films to re-release for many years,” says Deaf Crocodile Co-Founder and Head of Acquisitions & Distribution Dennis Bartok. “It took nearly five years to locate and negotiate the rights for the  film, and I’m thrilled we’re able to present it in such a beautiful edition with new interviews and artwork and rare archival material.”

Craig Rogers, Co-Founder and Head of Restoration for Deaf Crocodile, added on the deal, “The Cinémathèque suisse preservation provided us with a spectacular source element to use for our final digital restoration work. THE UNKNOWN MAN OF SHANDIGOR’s stunning locations and cinematography have never looked so good. 60s spy style at the highest level!” 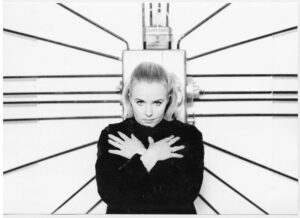 THE UNKNOWN MAN OF SHANDIGOR