Breaking news: Author J. Manfred Weichsel has announced his next book, The Calydonian Boar Hunt, an adaptation of the great Greek myth of the same name. 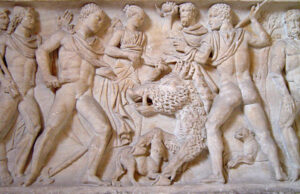 Weichsel last shook the earth with Not Far from Eden, an adaptation of the ancient myth of the Watchers, angels who rebelled against heaven in order to mate with human women. The response to that book has been so tremendous that Weichsel has decided to go back to the mythological well, but this time he is adapting one of the great Greek myths, The Calydonian Boar Hunt.

Weichsel first became interested in the myth after seeing the famous painting by Peter Paul Rubens at the Getty Center in Los Angeles well over ten years ago. Says Weichsel, “I immediately got the idea to write a book based on the hunt, but I was not a writer yet, and didn’t have the skills necessary to tell such a simple yet complex story, or any kind of story for that matter. But now I feel that I am approaching the height of my abilities as an author, and me telling this story is long overdue.”

In The Calydonian Boar Hunt, king Oeneus of Calydon forgets to place an offering in the shrine to Artemis, goddess of hunting. As revenge, Artemis sends a giant boar to terrorize the kingdom. The king gathers together the greatest heroes in Greece to hunt the boar, most of whom are former Argonauts, as the Argo has just returned from Jason’s expedition to get the Golden Fleece. Artemis, wanting her punishment to continue, sends the huntress Atalanta to join the hunting party, knowing that the presence of a woman will create strife among the men and lead to more destruction.

For fans of the horror element in Weichsel’s work, The Calydonian Boar Hunt also features one of the coolest monsters in all of Greek mythology, the Calydonian boar. This monstrous killer boar has bristles as sharp as spears and impales its foes with tusks as large as an elephant’s. This is a monster you don’t want to mess with, and it leaves a trail of death and destruction in its wake.

Weichsel hope to publish The Calydonian Boar Hunt in late April or early May.

To learn more about J. Manfred Weichsel and see what other books he has available, please visit his website.