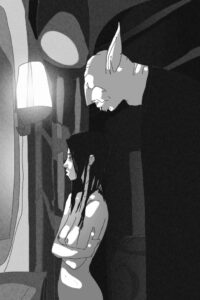 A graphic novel adaptation of the original silent film released exactly 100 years ago.

The German Filmmaker F.W. Murnau released his film NOSFERATU: Symphony of Horror in 1922. For the story, he infamously adapted Bram Stoker’s Dracula without permission. He was sued by the Stoker estate and forced to destroy all copies of the film.

Nosferatu is different than Dracula. It is simpler, and stranger. The most striking change is turning the vampire into a monster, a bat-like humanoid creature, rather than a man with fangs.

Nosferatu translates to ‘Bird of the Night’

As a graphic novel, it reads smooth and fast, with unique and compelling story structure, and unearths a haunting mood and emotion by the time the tale is finished. Readers may find it more accessible than the silent film, and the story will be introduced to a new generation audience.

This is the third full graphic novel from Narwhal, and completes his debut trilogy along side Earthbound and Foreign Agent.

While it is a strict adaptation, there is still lots of Narwhal in this work, and his creativity and focus on storytelling is prevalent.

More About the Book

-The book will also feature a gallery of illustrations by artists such as Kelsey Shannon, Shanth Enjeti, Alejandro Mirabel, Jared Jewell, and FresherLuke.

Clint, descendant of Bram Stoker, has also written a forward for the book.

-In all, readers can expect an 80 page book in two covers, one hardcover, and one softcover.

This is definitely a book horror fans can sink their teeth into, but first it needs a little support! Please click the link below and support this campaign today…

Check out the available perks including grabbing a hardcover and/or softcover of the book!

Visit Nosferatu by Narwhal on Indiegogo to…

-See more images from the book

-Learn about Narwhal’s next book

-View all of the available perks

If you can’t donate to the campaign please consider supporting this campaign by sharing this promotion, or the campaign itself on your social media! Thank You for your Support of Horror!

Ukrainian Dark Electro Band, BLAZERJACKET Speaks Of A Parasitic Society With New Video, “Get Out”!