ll 44 Episodes Plus MASTERS OF HORROR, 13 NIGHTS OF ELVIRA, & Much More

Freddy’s Nightmares has joined Screambox’s growing library of streaming horror content. This marks the streaming debut of the Nightmare on Elm Street anthology TV series, which has never been released on Blu-ray or DVD.

Originally airing for two seasons between 1988 and 1990, all 44 episodes are hosted by Robert Englund as Freddy Krueger. The iconic slasher is also the antagonist in eight of the stories, including the pilot. Directed by The Texas Chain Saw Massacre’s Tobe Hooper, the first episode serves as a prequel to the storied franchise. 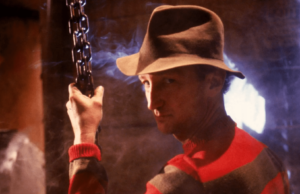 Screambox and Bloody Disgusting are hosting a Freddy’s Nightmares live-tweet of the first episode this Saturday, February 26. Press play at 5pm PST/8pm EST and join the fun using #FreddysNightmares on Twitter.

In addition to Freddy’s Nightmares, Screambox is the streaming home of classics like Re-Animator and The Slumber Party Massacre, bingeable series like Masters of Horror and 13 Nights of Elvira, unique documentaries like Unearthed and Untold: The Path to Pet Sematary and Fulci for Fake, and exclusive movies like The Stairs and Not Alone.

Browse by genre – from slashers and found footage to anthologies and “just plain weird” – or peruse monthly selections from genre luminaries, with February’s titles curated by House on Haunted Hill director William Malone. Can’t decide what to watch? Tune into Bloody Disgusting TV for a 24/7 stream of films, interviews, shorts, video podcasts, and more.