From PARKHOUSE PICTURES, producers of

ANNA AND THE APOCALYPSE & THE KINDRED 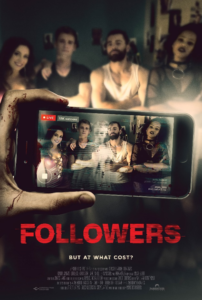 Why choose friends when you could have…Followers

Jonty, a failing influencer with an ambition to reach over a million followers, will stop at nothing to become famous. A new start at University brings with it hopes of a resurgence in his popularity when a demonic presence appears in his student house. Jonty decides to stream his and his housemates experiences with this supernatural entity to gain the fame and fortune he’s most been craving. But at what cost?

This is another exciting British independent production from Parkhouse Pictures, producers of the BAFTA Scotland nominated Anna and the Apocalypse. A darkly comic satire on today’s influencer generation, Followers combines horror with humour in the tradition of Get Out and Black Mirror putting a fresh new spin on found-footage movies. What starts as an hilariously bad YouTube video series develops into a warning to the world about a shocking new strain of supernatural serial killer. 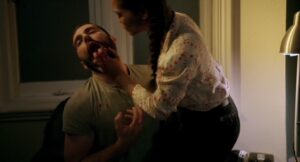 After hosting its World Premiere at Frightfest UK in August 2021, Followers has been praised as “entertaining from beginning to end” (Horror Obsessive) and a film that “keeps the audience guessing” (Entertainment Focus) with “scares that work” (Starburst).

For writer/director, Marcus Harben, this insightful chiller, which dissects our fascination for the transience of fame and social media, was set to be the first of many feature films. Sadly, this was not to be, as Marcus’ life was cut cruelly short by cancer in early 2021 after post-production had ended. Shortly before he died, Marcus described his motivation for creating ‘Followers’:

“I’ve always been obsessed with the ultimate puzzle of all found footage horror movies. We get who is shooting the footage – but who is cutting it all together? I’ve also been obsessed with the rise of the Influencer, especially when an actual reality star became President. I was able to combine those obsessions with ‘Followers’. I had billions of ideas that took a while to prioritise, but we ended up with a twisty, turny, spooky, darkly amusing little supernatural horror movie.”