Lost Angel, the feature directorial debut of Simon Drake, tells of a sibling snooping around after her sister’s mysterious death.  As the UK filmmaker tells us in this insightful interview, he had to work with the local police department on details to make sure he got it right in the script before a roll of film dropped. 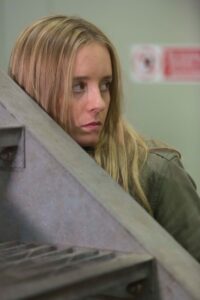 -PH: What part of the country, across the pond there, do you call home?

-Simon: I live in Brighton (East Sussex, the south of England)

-PH: Close to where “Lost Angel” was shot?

-Simon: Yes, most of Lost Angel was shot around East Sussex. However I created the fictional island of Newpoint for the film so I could film in other different locations too and have backdrops of my choosing without having to worry about geographical authenticity.

-PH: Does the landscape lend itself to the story? Written into the script from the get-go?

-Simon: I did not have specific places in mind, as I was never sure where we’d get the chance to have filming access. I had a vague sense of ‘I’d like this type of place’ and feel/tone when writing the script though.

-PH: Did you write with a budget in mind, as so many horror filmmakers do?

-Simon: Normally I do that. However for this script, my plan was to write what I felt the story needed first and let that dictate the ambition level rather than scaling down what I thought I could get for a micro budget. I still went in knowing compromise would be likely. If I, at least, started aiming high I could scale down if necessary. For example, if I’d write a scene set in a museum I figured, if I couldn’t get a museum location, I could get a library, if I couldn’t get that, I could get a bookshop, and so on downwards. In the end every location I wrote into the script I managed to somehow get permission to film in.

-PH: As you cover a murder in the film, what kind of research was required there?

-Simon: The local police department had a really helpful media team, who were great at answering questions. Also a couple of police officers I knew helped me with the correct radio codes, police uniforms and crime scene procedure. Some of those things I ended up embellishing for dramatic or story reasons, but I did at least pay a fair amount of attention to detail for the investigation elements to start with.

-PH: Did you learn anything about murder cases, especially ones that might have gone cold, that you weren’t aware of?

-Simon: Some of the stories I found fascinating (and frightening) were of serial killers who would find pubs/bars where police officers drank after their shifts, and befriend them to get intel on their own investigations. They would knew what areas to then avoid or change their patterns to stay one step ahead of the police whilst having a beer with them.

-PH: There’s some great moments in the film—what’s your personal favorite?

-Simon: In the first 5 minutes there’s a scene where Lisa goes to her sister’s flat for the first time and is looking around at the tiny details of Melanie’s life. A life which has now ended. Yet instead of having a private moment to grieve, some threatening goons show up which creates suspicion in Lisa to find out what really happened. It kicks the plot into gear.

LOST ANGEL is on digital March 15