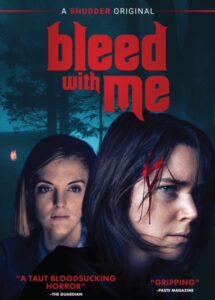 “a taut bloodsucking horror” – The Guardian

RLJE Films, a business unit of AMC Networks, has picked up select rights to the horror film BLEED WITH ME from Shudder, AMC Networks’ premium streaming service for horror, thriller and the supernatural. RLJE Films will release BLEED WITH ME on Digital HD and DVD on April 19, 2022. 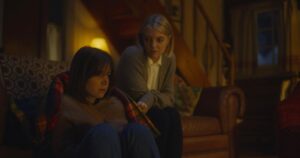 Written and directed by Amelia Moses (Bloodthirsty), BLEED WITH ME stars Lee Marshall (“The Detectives”, “19-2”), Lauren Beatty (Bloodthirsty) and Aris Tyros (“In The Dark”). The DVD will be available for an SRP of $27.97.

In BLEED WITH ME, Rowan, a vulnerable outsider, is thrilled when the seemingly perfect Emily invites her on a winter getaway to an isolated cabin in the woods. Trust soon turns to paranoia when Rowan wakes up with mysterious incisions on her arm. Haunted by dream-like visions, Rowan starts to suspect that her friend is drugging her and stealing her blood. She’s paralyzed by the fear of losing Emily, but she must fight back before she loses her mind.

Check out the trailer: https://youtu.be/DFvv93KMUoc