New Jersey’s favourite Superhero returns to London in this monster of a comedy based on the classic cult film! 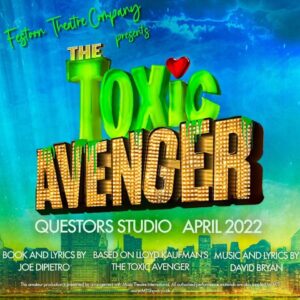 Based on Lloyd Kaufman’s cult film, The Toxic Avenger, and winner of the Outer Critics Circle Award for Best Off-Broadway Musical, The Toxic Avenger is a charming love story and laugh-out-loud musical that has it all — an unlikely hero, his beautiful girlfriend, a corrupt New Jersey mayor and two guys who play… well, everyone else … bullies, mobsters, old ladies, and stiletto-wearing back-up singers.  With book and lyrics by Joe DiPietro and music and lyrics by David Bryan (Diana The Musical), the show also features the most memorable and unbelievable duet you’ll ever see on any stage!

The Toxic Avenger was first staged in the UK at the Southwark Playhouse in 2016, before travelling to Edinburgh and playing the Arts Theatre in the heart of London’s West End in 2018. This return production is being produced by Festoon Theatre Company and features Inti Conde as Melvin Ferd The Third/The Toxic Avenger, Olive Stearman as Sarah, Emma Newman as Mayor Babs Belgoody/Ma Ferd/Nun, Melissa Chitura-Bidwell as Black Dude and Joe McWIlliam as White Dude.

The Toxic Avenger revolves around Melvin Ferd the Third who wants to clean up Tromaville, the most polluted town in New Jersey (just off Exit 13B on the Turnpike). Foiled by the mayor’s bullies, Melvin is dumped into a vat of radioactive toxic waste, only to re-emerge as The Toxic Avenger, New Jersey’s first superhero. Affectionately known as Toxie, our new hero is a seven-foot mutant freak with superhuman strength and a heart as big as Newark. He’s out to save New Jersey, end global warming and woo the blind town librarian.

It’s a toxic love story with an environmental twist! The Toxic Avenger will leave audiences laughing in the aisles as it rocks the house. Featuring a wailin’ rock score, this musical comedy has something for everyone!

WE WANT TO BELIEVE