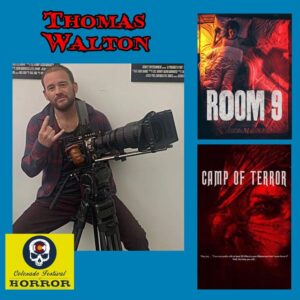 Thomas Walton is a producer, writer and director. Walton got started in the late 90s as an actor and has appeared in numerous TV shows and films. Walton then focused his energy into making films and had two scripts at the prestigious ICM partners with the late Jack Gilardi. Walton honed his craft by making short films and from there he went into feature films. His latest is the Lionsgate released film “Room 9” which stars horror icons Kane Hodder, Michael Berryman and Scout Taylor-Compton. It was released in select theaters, DVD and VOD on July 20, 2021. Recently Walton wrapped production on the second installment of Room 9, titled “They Turned Us Into Killers” which is now in post-production. He starts filming the 80s slasher flick “Camp of Terror” this spring/summer. Thomas Walton’s appearance is being sponsored by Angela Joseph, co-producer of “Camp of Terror”, social media marketing director/producer at Rokitpig and producer at Alien Donut Films.