New album ‘The monumental pandemonium’ to be released on April 29th and CD/Digital through Great Dane Records. 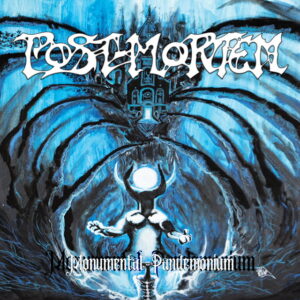 About 6 years after the release of their debut full-length effort ‘God With Horns’ (2016), Progressive Death-Metal 5 piece Post-Mortem is about to release its sophomore album called ‘The monumental pandemonium’ and planned for a worldwide release on April 29th through Great Dane Records.

In the meantime, the band offered a glance from this forthcoming record and the official music video of the song “Cryptic revelations” available right now on YouTube while physical pre-orders of the album are opened now on the label’s webstore.

Long-time band founded in 1994, Post-Mortem have been active since its birth until 2008 before to get on hiatus and reunited in 2018. During the first part of their career, the French death-metallers released two EPs (‘Mystic Delights’ in 2021, followed by ‘Mankind Autopsy’ 4 years later)

In 2012, the Frenchmen decided to get back on track and bega to work on the first ever full-lenfth record of the history of the band : ‘God With Horns’, released in 2016 through Great Dane Records.

6 years later and after touring/playing on stages next to bands such as Benighted, Gojira, Crusher, Loudblast or Nostromo, Post-Mortem is about to released its second album called ‘The monumental pandemonium’, collaborating again with GD Records.