Written/directed by Chris Cullari & Jennifer Raite and from the producers of explosive horror hits GET OUT, THE INVISIBLE MAN, and more!

OUT FRIDAY APRIL 29 IN THE U.S. IN SELECT THEATERS AND ON DIGITAL AND ON DEMAND

Trapped at Skylight’s isolated desert campus, The Aviary, Jillian (Akerman), and Blair (Izzo) join forces to make a treacherous escape. Alone in the harsh wilderness, they are consumed by paranoia and unable to shake the feeling that they are being followed by the cult’s leader, Seth (Messina), a man as seductive as he is controlling. With supplies dwindling and their senses failing, Jillian and Blair are faced with a horrifying question: how do you run from an enemy who lives inside your head? 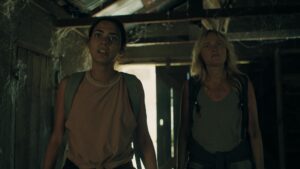 The feature directorial debut from Chris Cullari and Jennifer Raite who, as writers and creators, have frequently collaborated with Blumhouse TV on projects and first-look deals, and made a splash with their 2012 Vimeo Staff Pick horror-comedy short THE SLEEPOVER. The duo created and served as executive producers on the 2016 Blumhouse and YouTube Red series 12 Deadly Days and have present and upcoming projects and pilots in development with Universal Television, The CW, CBS TV Studios, and Blumhouse.

Las Cruces, NM Named One of Moviemaker’s Best Places to Live and Work as a Moviemaker in 2023!