Solo developer Steve Gabry, aka Portable Moose, is bringing Sally Face to PlayStation and Xbox next week, with Xbox Pre-Orders starting April 8. Sally Face is a dark adventure game following a boy with a prosthetic face as he investigates a supernatural mystery with his friends.

Despite the game being solely created by Gabry, the console ports were primarily handled by The Knights of Unity. Along with this launch also comes two new translations: Spanish and French. The new translations will be available on other platforms shortly after the 15th. 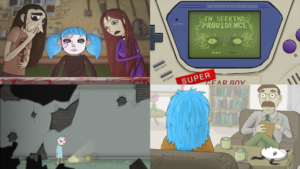 A story-driven game, with a unique hand-drawn style that deals with dark themes such as death, murder and suicide. Sal “Sally Face” Fisher uses his handheld video game system to speak with the dead and learn their stories. After a string of mysterious murders, Sal and his three friends discover something truly sinister casting shadows over their small town.