Alex and Ben are getting priced out of their NYC neighborhood by rising rents when they suddently find a deal that’s too good to be true— a fully-furnished three-bedroom downtown sublet for only $2K a month. The listing does say it’s “evil,” but Alex assumes that’s short for “East Village,” like “SoHo” as an abbreviation for “South of Houston” or DUMBO for “Down Under Manhattan Bridge.”

When they check it out, the broker confesses that previous tenants have come to horrific ends. But finding an NYC apartment is always about trade-offs, and the risks of a supposed haunting seem small compared to 2,000 sq ft and an eat-in kitchen.

Unfortunately, a bad roommate situation can ruin any dream apartment, and a horde of murderous ghosts turn out to be more than Alex and Ben can handle. With the help of Alex’s ex-girlfriend and a pair of Coney Island paranormal investigators, their lives soon depend on escaping the evil of their sublet. 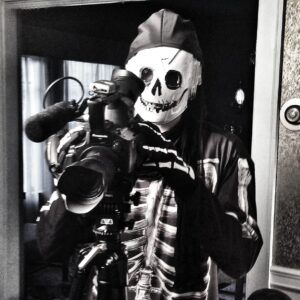 Inspired by true events in the allegedly haunted apartment where it was shot, eVil Sublet is made by a husband, wife, and best friends. It defies gender, sex, and age stereotypes, with a woman over 50 as the star and a cast led by predominantly LGBTQ+ actors playing LGBTQ+ characters.

eVil Sublet celebrates groups historically underrepresented on screen. Four of the five leading roles are LGBTQ+ characters played by LGBTQ+ actors. We proudly join the emerging movement led by movies and shows like Jakob’s Wife, Yellowjackets, and Everything Everywhere All At Once, to represent women in their 40s and 50s on up as heroic, sexy powerhouses. The women of eVil Sublet have roughly twice as many lines as the men.

But social commentary aside, eVil Sublet is an R-rated, scary, funny, gory, sexy rollercoaster ride of a movie that will be fun for all mature audiences.

All the makings of a great movie, but first they need a little help to finish it! Please click the link and support the movie today:

-Get a GTFO Kit to keep the stubborn specters away

-Receive a prop from the film

-Artwork by the acclaimed Christie Allan-Piper plays a key role in the movie, and now an original pastel rendering of this girl and her creepy doll can haunt your home as well.

Visit eVil Sublet on Seed&Spark to…

-Learn more about what inspired the film

-Read more about the cast and crew

“Another Yeti A Love Story: Life on the Streets” Coming February 14th