A very Special Guest of Honor has been announced for PARACONN 2022: JOHN ZAFFIS, who worked for his Aunt and Uncle, THE WARRENS! John Zaffis has over four decades of experience studying and investigating the paranormal. John has been featured in the SyFy television series Haunted Collector and has appeared on Ghost Hunters and Ghost Adventures. John also appears in “Graveyards” and “In A Dark Place,” both books written by Ed and Lorraine Warren. John wrote “Shadows of the Dark.” Zaffis will be at the show both days, along with other great guests and attractions. One more Special Guest of Honor will still be added.

The first-ever Connecticut Paranormal Convention creeped (in more ways than one) into the state last Summer. Expecting to draw a few hundred attendees, the historic inaugural event sold out with more than fifteen hundred attendees over the two-day period. The follow-up, “ParaConn ll” returns to the Ansonia Armory, 10 N. State Street, Ansonia, CT for 2 days only, on Saturday and Sunday, July 16 and 17, 2022 (doors open 11:00am daily).

The haunted weekend event will feature special guests, seminars, panels, vendors, exhibits and much more. Presented by paranormal enthusiasts Nick Grossmann and Charles F. Rosenay!!!, who bill themselves as “The Shaman and The Showman,” the supernatural extravaganza will feature a plethora of fun and ghost-filled activities for all ages, of interest to the most experienced of paranormal investigators as well as the most casual fan or student of the occult and all things spooky.

ParaConn is the brainstorm of Grossmann, who has been clairvoyant his entire life, and is dedicated to the paranormal field. He has traveled extensively, performed exorcisms, conducted interactive happenings, and has collected some of the rarest haunted artifacts in North America and overseas. His rare collection will be on display at the convention. Nick’s organization, Ghost Storm, contends that the area in CT known as “The Valley” is one of the most haunted regions in the country. He refers to it as “The Connecticut Triangle,” and picked the Armory in Ansonia, which he believes to be haunted, as the ideal location for this conference. The event has the backing of the city and the Mayor’s Office.

Charles Rosenay!!! is no stranger to things that go bump in the night. The founder and original owner of Connecticut’s largest indoor haunted attraction, Fright Haven, in Stratford, he has been scaring visitors for over fifteen years. Rosenay!!! is also the host and organizer of the Dracula Tours to Transylvania (yes, in Romania) as well as the annual GHOSTours to Europe, presented by his travel company Tours of Terror. Charles has co-hosted tours and investigations with renowned ghost hunter Richard Felix, best known for his work in the U.K. on the BBC’s “Most Haunted.” Rosenay!!! has recently authored “The Book of Top 10 Horror Lists,” which will be on sale at ParaConn with a book signing and meet & greet.

Rosenay!!! and Grossmann have conducted paranormal investigations together, and they will be joined over the weekend by other paranormal teams and individuals, who will be on hand to meet guests, sign autographs and speak on stage: Jason McLeod, Jimmy “Mr. Haunted” Petonito, Larry and Debbie Elward, Bill Hall, Christine and Daniel Peer, Leanna Renee Hieber, Kathy Churuszcz, Colin Haskins, Mark Vecchitto, Black Crow Paranormal, Paul Ferrante, Tim McLaughlin, The Connecticut Paranormal and Supernatural Tracking Society, and East Coast Paranormal Photography.

Another major highlight of the weekend is the huge marketplace with vendors and exhibitors from all over the East Coast. Last year, the convention boasted sixty vendors, and this year there will be eighty! Vendors will include paranormal groups, haunt artists and businesses, horror and sci-fi genre booths, authors, publishers, clothing costumes & make-up specialists, cryptozoology, wizardry, astrologists, tarot and palm readers, psychics/mediums, occult artifacts, artisans, crafters, jewelers, monster memorabilia, sci-fi collectibles, hand-made items and related merchandise, etc. Featured vendors include Milford’s Weirdo Wonderland, the Frankenstein Twins and Paul Longo, publisher and editor of the GhostWatch Magazine. 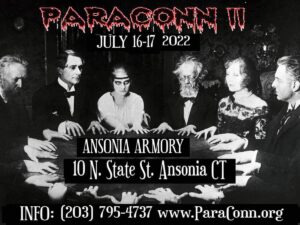 All ages are welcome, under 16 must be accompanied by an adult. The hours are 11am-6pm on Saturday and 11am-6pm on Sunday. Advance General Admission is only $14.99 in advance, $20 day of show. There are also a limited number of advance VIP admissions for $19.99, which entitle guests to early admission (10am), a souvenir gift, and other benefits. Tickets on sale now from: paraconn.ticketleap.com/paraconn2. Parking is free. Food trucks/refreshments will be available. Presented in association with the City of Ansonia under the auspices of the Mayor’s Office.

The website for Connecticut’s first-ever Paranormal Convention is www.ParaConn.org. For further information call (203) 795-4737 or email CTParaConn@gmail.com.

May the spirits be with you.