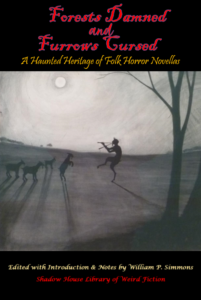 Draw down the moon, curse a poppet, and cast the bones with a chilling anthology of folk horror novellas.

Folklore is the dreaming moment between fact and fiction. Exploring cultural nightmares, supernatural visitants, and humanity’s uneasy relationship with nature, folk horror delights in our demons. Horrors of the ancient past cast shadows on the unsuspecting present, reconnect us primal forces, and confront us with our inhuman condition. Pan summons us…and we rush to heed his call.

This transformative genre has experienced a renaissance in the 21st century, evoking sacraments of sin and salvation for an emotionally isolated age. FORESTS DAMNED AND FURROWS CURSED: A HAUNTED HERITAGE OF FOLK HORROR NOVELLAS unleashes a macabre mummer’s dance of pagan rituals, occult secrets, and devastating deities.

Genre legends and unjustly neglected authors reveal the secret geography of nightmare in five novellas that represent major motifs of the folk horror genre: terrifying pagan traditions practiced in unholy locales; malevolent creatures from legend stalking isolated communities; dangerous truths hidden in folk stories; the terrible sentience of nature; the potency of superstition against logic. These storytellers are modern Shamans who spin nightmares by firelight, guiding us between the worlds and seducing us with what we most fear and desire.

The “Genius Loci” of an ancient Welsh countryside spreads its malign influence in John Buchan’s THE WATCHER BY THE THRESHOLD, the granddaddy of possession literature. Faerie Tales become terrifyingly real for a professor who investigates the “Little People” in Arthur Machen’s THE NOVEL OF THE BLACK SEAL. A goddess reborn in a child evokes desire and death in Vernon Lee’s DIONEA. A man’s love fornature is horribly reciprocated by a forest in Algernon Blackwood’s THE MAN WHOM THE TREES LOVED. And the great god Pan spreads horror and ecstasy in Edgar Jepson’s little-known supernatural masterpiece THE GARDEN AT 19.

The second volume of The Shadow House Library of Weird Fiction, FORESTS DAMNED AND FURROWS CURSED is a sacred marriage of folklore and fiction. Genre historian and bestselling author/editor William P. Simmons initiates you into the secrets of our horror heritage, tracing the origins and evolution of folk horror in a compelling brew of fiction, introduction, story notes, and discussion prompts.

Surrender to the siren song of myth and dance in the shadows of a sidhe. Embrace the nightmares of your ancestors and delight in our tradition of dread. Available in Kindle and trade paperback at Amazon, https://www.amazon.com/dp/B09YTFBWQ9

William P. Simmons is a critically acclaimed and Amazon bestselling author, editor, poet, and critic specializing in supernatural horror fiction. His collection WE FEED THE DARK: TALES OF TERROR, LOSS, AND THE SUPERNATURAL received praise from Adam Nevill, Eric J. Guignard, and John Palisano. His work has been featured in Publisher’s Weekly, Rue Morgue, Cemetery Dance, All Hallows, and several other publications. His latest anthologies include SEASON OF THE DEAD: SUPERNATURAL HORROR FOR HALLOWEEN, YULETIDE FRIGHTS: VICTORIAN GHOST STORIES FOR CHRISTMAS, and WILDWOOD: TALES OF TERROR & TRANSFORMATION FROM THE FOREST. His fiction and poetry earned *8* HonorableMentions in The Year’s Best Fantasy & Horror.

Actress Emily Goss as Jennifer takes a Ghost “Shower” in this Clip for The House on Pine Street!