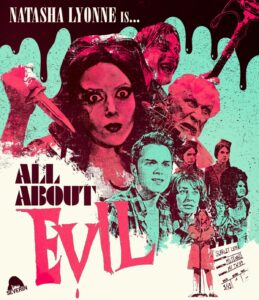 “dares to be everything a gushing fan boy, girl
or drag queen could want.” — Daily Dead

“A tribute to midnight cinema that wears its influences
on its red-soaked sleeve.” — Screen Anarchy

Following a world premiere at the San Francisco International Film Festival and a limited theatrical run in 2010, Peaches Christ’s All About Evil disappeared underground for years, becoming the stuff of legend. Now, the demented, blood-splattered classic is back for good, courtesy of a June 10th special edition Blu-ray release from Severin Films and a North American streaming release on Shudder June 13th. 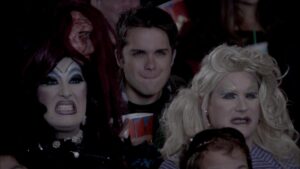 The Blu-ray of All About Evil will feature a brand-new HD restoration of the feature, along with newly-produced and archival bonus features for fans to devour. Severin Films will release the Blu-ray on June 10th. Shudder will release the film on its service June 13th to subscribers in North America.

Of the film’s long awaited resurrection, Peaches Christ shared, “For years, the movie has been unavailable and fans have been clamoring for it. As the creator, it’s been frustrating to say the least. I feel like I’ve been given a great gift from both Severin and Shudder and am thrilled so many new people will discover my Evil little baby. The BluRay and features are truly stunning. I’m really proud of the film and am hoping the re-release helps get another feature film going!”

In the years since the birth of All About Evil, Peaches Christ has toured the globe, scaring and delighting audiences. For the past two years, Peaches has hosted Midnight Mass with Michael Varrati (Tales of Poe, “Dragula”), a podcast based on Peaches’ long-running cult movie series in San Francisco. Every week, the pair go deep into discussions on the nature and fanbase of cult cinema, discussing everything from the works of Dario Argento to Rock N’ Roll High School to Matilda.

When a mousy librarian (Lyonne) takes over her late father’s struggling movie theater, a series of grisly murders caught on camera will transform her into the new queen of indie splatter cinema.

The Blu-ray of All About Evil will come with a number of exclusive newly-commissioned and archival bonus features. A full list will be announced shortly.