Press Release
May 23, 2022May 23, 2022
Posted By: HorrO 0 Comment horror, Nick Chinlund & Danny Trejo Lead a Ragtag Group of Americans Up Against a Monster in THE PREY: LEGEND OF KARNOCTUS, Press Release, promote horror, Spread the Horror

Stonecutter Media and Lennexe Films are excited to announce the limited theatrical and VOD release of The Prey: Legend of Karnoctus, from co-directors Eric Hensman and Matthew Hensman. The action-adventure monster movie will open in Los Angeles June 3, 2022 at the Regency Theatres Van Nuys Plant 16 for a weeklong run. On June 7, The Prey: Legend of Karnoctus will be available nationwide on all major Cable VOD platforms, including Comcast, Charter, DirecTV, Cox, and Verizon Fios.

On July 7, The Prey: Legend of Karnoctus will debut on digital platforms, including iTunes, Prime Video, Vudu, and Google Play. 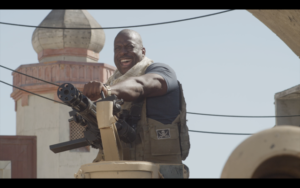 Ahead of the official release, The Prey: Legend of Karnoctus will have an official red carpet premiere at the Regency Bruin Theatre in Westwood on June 2.

In the Afghanistan desert, a group of mercenaries out for treasure complete their greatest heist. Seeking refuge from the hunting Taliban in a nearby cave, they are soon joined by retreating US soldiers, and both groups are trapped within by a rocket explosion at the cave’s entrance. The newly joined parties need to work together to find an escape through the labyrinth but soon realize they’re being tracked by a deadly beast that local legend calls Karnoctus; and they have become… the prey.

UFOs Are Real, But They Might Not Come in Peace: New d+ Doc ALIEN ENDGAME Premieres May 20