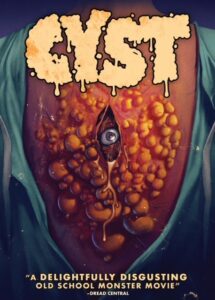 “a pus-filled, gooey pop of camp and kitsch” – THN

RLJE Films, a business unit of AMC Networks, will release CYST on VOD, Digital HD and DVD on June 21, 2022.

In CYST, nurse Patricia works under an enthusiastic plastic surgeon who believes he’s invented a breakthrough cyst-removal machine and, against Patricia’s sound advice, will stop at nothing to patent it so it can be used for his patients. But when their differences turn into a physical altercation, damaging the machine, what started as Patricia’s last day on duty becomes a battle for survival after the doctor’s “Get Gone” cyst-removing invention inadvertently turns a patient’s tumor into a cyst-monster that terrorizes the office.

Check out the trailer: https://youtu.be/LWmDLHyOkSE

ABOUT AMC NETWORKS
AMC Networks is a global entertainment company known for its popular and critically-acclaimed content. Its portfolio of brands includes AMC, BBC AMERICA (operated through a joint venture with BBC Studios), IFC, SundanceTV, WE tv, IFC Films, and a number of fast-growing streaming services, including the AMC+ premium streaming bundle, Acorn TV, Shudder, Sundance Now and ALLBLK. AMC Studios, the Company’s in-house studio, production and distribution operation, is behind award-winning owned series and franchises, including The Walking Dead, the highest-rated series in cable history. The Company also operates AMC Networks International, its international programming business, and 25/7 Media, its production services business.

A New Breed of PREDATOR is Coming! New Trailer for THE DAWNSEEKER Released!