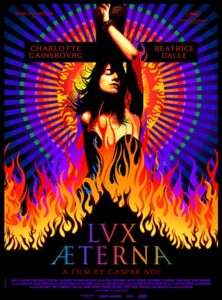 After a nationwide theatrical release, Gaspar Noé’s buzzed-about film will hit digital platforms this Friday, June 10th in N.A. and be followed by a Collector’s Edition 2-disc Blu-Ray available summer 2022

Following a successful theatrical run across the United States from May into early June that put the film in the top 10 indies at the box office, Yellow Veil Pictures will release Gaspar Noe’s LUX ÆTERNA on digital platforms including Amazon, Google Play, Vudu, and more this Friday, June 10th in North America, followed by a 2-disc Collector’s Edition Blu-Ray available summer 2022. LUX ÆTERNA is currently available for digital pre-order on Vimeo on Demand.

LUX ÆTERNA takes place backstage of a French film production, often utilizing split-screens to follow two characters at once. Charlotte Gainsbourg, acting as herself, plays the film’s — and the film-within-a-film’s — leading role of an actress taking on the role of a witch burned at the stake while French actress Beatrice Dalle, playing a version of herself as well, takes on the on-screen role of director. The film progresses with mounting tension as the set descends into aggressive chaos— both in style, form, and plot. Actress and model Abbey Lee (The Neon Demon), Karl Glusman (Love), Claude-Emmanuelle Gajan-Maull (Climax), Félix Maritaud (Sauvage / Wild, Knife + Heart), and Clara Deshayes also appear as interpretations of themselves.

Twin Peaks-Themed Band A PLACE BOTH WONDERFUL AND STRANGE Announces The Release Of Their Video, “Kristae.”