Samera Entertainment brings us a quick look at this bewitching thriller from Midnight Releasing. 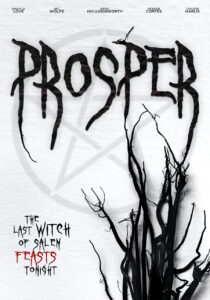 Now on VOD, the last witch of Salem comes home to feast in PROSPER, a haunting odyssey of horror from Midnight Releasing.

April Hollingsworth stars as Irene Good, a rumored descendant of Sarah Good, the first woman tried and executed during the Salem Witch Trials. Irene makes her living as a necromancer who can commune with the dead. One day, Dalton (Nicholas Wolfe) pays a visit to Irene in a desperate bid for closure in the aftermath of his brother’s untimely death. But what Dalton doesn’t know is that he’s been led into a trap, and he’s brought his friends along for the ride. But at least one of his friends has the good sense to know that something’s amiss, and that’s Dalton’s best-friend Sam (Shayla Love). What follows is an unfathomable night of terror where nothing is safe and not everyone will survive.

“I set out to make a movie that is going to creep you out when you’re alone, keep you awake in bed, and really screw with your mind. I’m told I did that ten times over!” – Deronte Smith (writer/director)

“People have asked me ‘Why does the movie feel so real? I tell them it’s because the primary location was actually haunted and it comes across in the movie.” – Deronte Smith (writer/director)​

PROSPER was shot on an ultra low budget throughout the state of Georgia. One particular location, a plantation home in Alpharetta, is the center of the action, and gives off some rather creepy vibes that go beyond the events on screen. This nefarious aura adds an extra dimension of tension that gives PROSPER a unique spin on an old fashioned tale.
You can experience the tension for yourself right now by checking out PROSPER on all available streaming platforms.​

“PROSPER is a wild movie with a vivid depiction of the occult. It combines nail-biting suspense, fun pop culture and a bizarre fascination with Satan.” – Darrin Ramage (CEO Midnight Releasing)

PROSPER is available now from Midnight Releasing. Keep clicking back for more updates on the latest Horror, Sci Fi and Thriller releases, and be sure to follow Samera Entertainment for even more entertainment headlines.

Founded in 2009 by Darrin Ramage, Midnight Releasing is a premiere home entertainment distributor of quality independent genre films released only in the North America Region. With a following of thousands on social media outlets, Midnight Releasing continues to draw attention with each release.