A new Taiwanese mother tries to survive the strictest postpartum tradition but soon realizes that she needs to escape it. 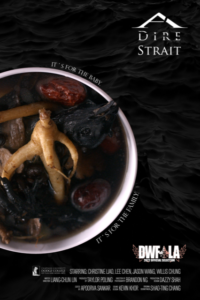 Demi has stayed in bed for weeks due to the tradition “Zuo-Yue-Zi”, in which Chinese people believe to heal the “broken body” of women after labor and help them produce the most nutritious milk. Although Demi tries to be as cooperative as possible, the weeks-long confinement and endless chicken soup push her to her limit. She desperately needs a break; however, just one misstep spirals into her worst nightmare…

Liang-Chun Lin was born and raised in Taiwan. She earned her BA of Radio and Television at Chengchi University in Taipei and MFA from Chapman University in Film Production, emphasizing on directing. After 9 years of experience in this industry, she now works with both Taiwanese and American productions, as a writer director, a bilingual coordinator, or an assistant director.

Two of her previous short films, YUTAS (2013) and HIS PERFECT DEAD EX (2018), were nominated as Best Student Short and Best Narrative Short in The Golden Harvest Film Festival (biggest short fest in Taiwan) and the recent one, Still Rolling, was selected by Los Angeles Asian Pacific Film Festival and San Diego International Film Festival. A DIRE STRAIT (2022), which examines the severity of the postpartum custom of “Zuo-Yue-Zi”, is Liang’s graduate thesis film.

Other than film making, she is also devoted to social issues. Her participation in the LGBTQ+ movement, death penalty abolishment and rural education in Taiwan has made an impact to her films. Liang is currently in development on Grandmas’ bikini, a new feature film focused on the identity crisis and self-recognition of elderly women.

In Taiwan, around 40% of mothers experience postpartum depression. Studies have shown that cultural factors play a crucial role: the tradition of postpartum confinement, the power structure in the family and our arbitrary interpretation of maternity.

A Dire Strait is based on the postpartum custom “Zuo-Yue-Zi.” Although it might be practiced differently in every family, it concretizes the arbitrary standard of a good mother in our culture. This film is a projection of my fear of this judgmental system as an Asian woman.

I have witnessed my mother, her mother, and all other mothers in my family spend their lives struggling. My mother can’t stop talking about how much she was pressured during pregnancy and after giving birth. She had to sneak food into her room, forbade from a fan or even an open window during the steamy summer. “I was having heatstroke and growing heat rash all over my body, although they think I would catch a cold as soon as I take off my sweater.” My mom now laughed about it.

Chinese mothers feel obligated to prioritize family over self-care while also doing it in a “right” way that pleases elders. In order to benefit the family, the fundamental unit in our collectivist belief, women are forced to lose their uniqueness and what they want in life. They not only step into the system but also trim themselves to fit into it. Eventually, mothers see it as an achievement and continue training the next generation to suffer the same way. Many younger mothers nowadays still bear such family pressure.

It took my mom, the most talented woman I know, 30 years to find out what she wanted to do with her life other than being a mother. She privileged me with a lot more freedom and choices than she had. A Dire Strait is my shout-out for her, as well as my first statement to break this chain.

The term 坐月子 (zuo yue zi) or literally translated to “Sitting The Month” means to allow postpartum mom to do nothing but to “sit” (rest) recover for one month after delivery. This practice has been around for thousands of years and it is still being practiced by most Chinese.