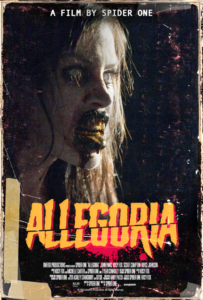 RLJE Films and Shudder will release the horror film ALLEGORIA On Demand and Streaming on Shudder on August 2, 2022 which had its World Premiere at Panic Fest 2022.

ON DEMAND AND STREAMING ON SHUDDER: August 2, 2022

SYNOPSIS: A group of artist’s lives become unwittingly entangled as their obsessions and insecurities manifest monsters, demons and death.

Photos from Beyond Fest Featuring Titane, Lamb, and Halloween Kills