Author and new parent Tom Starita wanted his third novel to challenge readers and himself by writing his worst nightmare. He more than succeeded with his latest novel, a horror story called Delta, arriving on August 4, 2022. 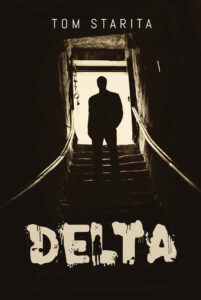 Delta is the story of a grieving father trying to come to grips with who or what lives in his basement. Jason Carico’s whole world comes crashing down when his daughter Delta drowns in front of him. Then somehow grows impossibly worse when something claiming to be Delta comes back. Desperate to believe her, Jason attempts to live a normal life while hiding his nightmare below. His anxiety explodes when his late wife’s sister appears on his doorstep. Can he trust her? Would she believe him? And what will the police think if they ever find out the only African American man in town has a white girl trapped in his basement?

“I set out to write my ultimate nightmare and, along the way, decided to add every other fear hiding in my subconscious. That’s about ten years of therapy packed into one story.

Tom Starita has written two previous novels, Two Ways to Sunday and Growth and Change Are Highly Overrated. When asked for her thoughts about him, Oprah Winfrey said, “Who?” Tom Hanks refused to respond to an email asking for a quote, and former Mets great Mookie Wilson once waved to him from a passing taxi.

Originally from Staten Island, NY, Starita has now found a home in Connecticut with his amazing wife Shannon, their beautiful daughter Chloe and their potato of a dog Lola. But, most importantly, he loves the New York Mets.

Copies of Delta are available for preorder with all major booksellers, including Black Rose Writing, Amazon, and Barnes & Noble.

MSR Studios Announces Their Next Film “Like A Shadow”