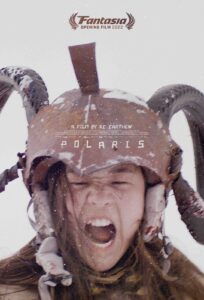 Set in 2144 against the harsh backdrop of a frozen wasteland, Sumi, a human child raised by Mama Polar Bear, narrowly escapes capture from a brutal Morad hunting party and sets out across the vast winter landscape. When Sumi stumbles across Frozen Girl, an unlikely friendship is forged and together they race ahead of the vindictive hunters towards the only guiding light Sumi knows, the Polaris star

A winter-set, post-apocalyptic fantasy fable set in the year 2144, POLARIS takes place in an unspecified part of the world reeling from the consequences of ecological fallout, uniquely conceived in a wholly new language and presented without subtitles. The all-female cast is impressively led by 13-year-old — who was only 11 at the time of filming — Korean-Canadian actress Viva Lee (Syfy’s Deadly Class) alongside Khamisa Wilsher (Netflix’s The Hollow, CW’s Charmed) and veteran stage, television, and film actress Muriel Dutil (Curling, Ressac).

Expanded from her award-winning short film FISH OUT OF WATER, which premiered at Fantasia in 2015, Carthew has set the stage with a magical world inspired by Greek mythology with themes incited by the urgency of the current environmental crisis and built upon the activist movement and ideology of ecofeminism. Recognized for spectacular world-building in her visual storytelling, POLARIS is Carthew’s second feature following her celebrated debut THE SUN AT MIDNIGHT, which starred Kawannáhere Devery Jacobs (Reservation Dogs, Blood Quantum).

A pan-Canadian co-production between the Yukon, Quebec, and Ontario, POLARIS is produced by Carthew and Max Fraser for Little Dipper Films Inc., Paul Cadieux for Megafun Productions, and Alyson Richards for Alyson Richards Productions. Patrick Ewald and Kalani Dreimanis serve as Executive Producers for Epic Pictures Group, who also co-financed and handle world sales excluding Canada on the title.

Founded in 2007, Epic Pictures is an independent content studio with the mission of delivering the best-in-class genre entertainment “for fans, by fans.” Epic Pictures produces, finances, and distributes approximately twenty-thirty independent genre films a year. In 2013, the company established Epic Pictures Releasing which is its US focused distribution division. In 2017, Epic Pictures acquired the world’s most popular horror website, Dread Central, and launched its unique horror label, Dread, followed by its AVOD channel, DreadTV. In 2019, Epic Pictures started the horror gaming site, DreadXP, with a focus on editorial, reviews, podcasts, and original streaming content. In 2020, DreadXP began a video game production and publishing division in collaboration with some of the most innovative developers in the independent gaming space.