Cults, a Spotify Original from Parcast, steps into the minds of those who led and joined the most controversial organizations in history. Max Cutler, Head of Talk Creator Content & Partnerships at Spotify and Founder of Parcast Studios, is bringing true crime fans a new book based on the acclaimed podcast,Cults: Inside the World’s Most Notorious Groups and Understanding the People Who Joined Them, releasing today, July 12th.

Cutler profiles ten notorious figures, unveiling the mechanics that make these groups tick and the patterns that link together cult leaders across generations. Disturbing as they are spellbinding, cults prey on the very attributes that make us human: our desire to belong; to find a deeper meaning in life; to live everyday with divine purpose.

With national bestselling author Kevin Conley, Cutler looks closely at the leaders’ motivations and manipulative strategies, telling the stories of their rise to power and fall from grace, sanity, and decency. Cults is a study of humanity, an unflinching look at what happens when the most vulnerable recesses of the mind are manipulated and how the things we hold most sacred can be twisted into the lowest form of malevolence. 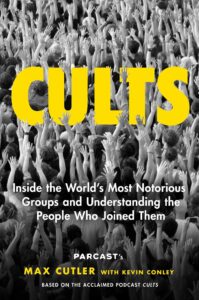 In celebration around the book’s launch, the Cults podcast series has been releasing special episodes daily from July 6th – July 17th around the different generational cult leaders that the book focuses on including Charles Manson, David Koresh, Keith Raniere, and Marshall Applewhite.

Doomsday predictions. Religious doctrines. Extraterrestrial orders. What really goes on inside a cult? Step into the minds of those who led and joined the most controversial organizations in history. Cults is a Spotify Original from Parcast. New episodes Tuesdays.

About Cults: Inside the World’s Most Notorious Groups and Understanding the People Who Joined Them:

Based off of the hit podcast, CULTS: INSIDE THE WORLD’S MOST NOTORIOUS GROUPS AND UNDERSTANDING THE PEOPLE WHO JOINED THEM is this summer’s essential reading for any true crime fan. CULTS unfolds the many motives behind groups like NXIVM, Heaven’s Gate, the Peoples Temple, and more, taking an expanded look at the people who led and followed the most radical organizations in history. What powers did their leaders possess? How did their followers operate within the world? Why did their beliefs stick, even after they’d grown bizarre?

CULTS is an unflinching exploration into what happens when the most vulnerable recesses of the mind are twisted into the lowest forms of malevolence — revealing eye-opening details which will surprise even the most devoted true crime fan. If you love the Cults podcast, this is the next-level companion that will take you deeper into the dark side of human nature than ever before. Ten disreputable cult leaders. Ten stories of power, mystery, and destruction.

Max Cutler created and founded Parcast Studios in 2016. With Cutler at the helm, Parcast has launched some of the most popular and highly-ranked weekly podcasts, specializing in popular genres like mystery, true crime, pop culture, wellness, and history. After three years of exponential growth, Spotify acquired Parcast in 2019. Cutler maintains his role as head of the studio, revolutionizing the podcast space and creating hit after hit. Most recently featured on Fortune’s 40 Under 40, Forbes 30 Under 30 and The Hollywood Reporter’s 35 Rising Executives Under 35 lists, Cutler shows no sign of slowing down, as Parcast continues to lead the industry in global growth with over fifty adaptations to date and more to come.