Raven Banner Entertainment is excited to head to Montreal for the Fantasia International Film Festival with three exciting and very different titles making their world premieres: The Breach on July 25, The Fight Machine on July 27 and Cult Hero on July 30.

Just before he leaves for the big city, Chief of Police John Hawkins is asked to consult on a strange case. A body is found in a boat on the Porcupine River with unsettling wounds. It’s a find that shakes up the small town of Lone Crow and a job for local coroner Jacob Redgrave. They begin to suspect the remains are of a missing physicist, Dr. Cole Parsons, and Hawkins is forced to revisit old ties with his ex, Meg Fulbright—the town’s charter-boat captain who knows the waterways like the back of her hand. She takes Hawkins and Redgrave to Parsons’ leased home, where he conducted secret research deep in the woods. When they arrive, they find the home in disrepair, with an indescribable heaviness and a strange machine in the attic. Parson’s missing daughter and a visit from his grieving wife Linda put the investigation deeper into mystery, and more secrets revealed push everyone to the brink of danger.

Based on the Audible Original book by Canadian horror author Nick Cutter, The Breach is Rue Morgue president Rodrigo Gudiño’s second feature film. The Breach was executive produced by guitar legend and horror aficionado Slash, who also contributed to the score. 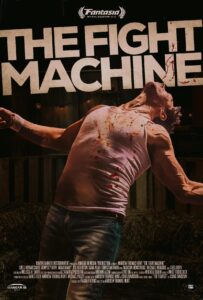 In The Fight Machine, Paul Harris leads a sheltered existence. The son of a winery owner, his suits and cars are paid for, his career in the family business assured. He is insulated from the rough realities of life—until a vicious barroom beating sets him down a new path.
Rob Tully also feels that his life is on a set course. A born boxer with natural talent, Rob trains with his father, Reuben, and his uncle Tommy, both of whom believe that a gift like his can change their lives.

Rob and Paul’s fathers want so much more for their sons than they ever had themselves, but both sons are determined to find their own way. While Paul descends into the world of hardcore bodybuilding and boxing gyms, Rob struggles under the expectations set upon his young shoulders.

Their disparate paths lead to The Barn, an underground fight venue where vicious and hopeless men brawl for cold hard cash. No rules, no limits, no brakes. And when two fighters step into a ring where anything goes, sometimes only one walks out.

Dale Domazar is a washed-up private investigator and “cult-buster” whose last cult bust resulted in a mass suicide. Kallie Jones is a realtor who needs to control everything. With her husband Brad sleepwalking through life, Kallie is certain a stay at Master Jagori’s retreat for men will help their marriage. But when Brad extends his stay against Kallie’s wishes, she suspects he’s been indoctrinated into a cult and calls Dale for help. This moment couldn’t have come at a better time, giving Dale a chance to redeem himself with this “Karen” lite, and—you guessed it—mayhem ensues, especially when they discover Master Jagori’s sinister plan.