Trailer & Poster Released For Perry Blackshear’s Hotly-Anticipated, Widely-Celebrated Psychological Demonic Horror Hit When I Consume You — Out On VOD August 16 From 1091 Pictures

The Breakout Festival Sensation Will Be Available in the US, Canada, UK, Ireland, Australia and New Zealand 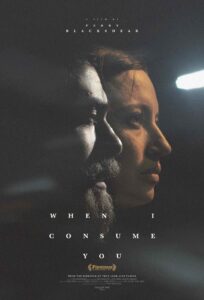 A woman and her brother seek revenge against a mysterious stalker. A gritty, slow-burn urban folktale about family, damnation, and redemption.

OUT ON DIGITAL PLATFORMS AUGUST 16

“Suspensful twist on revenge & courage in the face of helplessness”

“A poignant message about second chances”

“An intriguing story of trauma, grief, and redemption alongside a fascinating supernatural mythos”

When I Consume You marks the third feature for New York-based filmmaker Perry Blackshear following his award-winning psychological horror feature debut They Look Like People and celebrated sophomore effort, the aquatic supernatural horror romance The Siren. All three of his films have been widely embraced and praised both on the festival circuit and upon release, with They Look Like People winning a Jury Honorable Mention at the 2015 Slamdance Film Festival upon its premiere.

Blackshear again teams up with creative collaborators MacLeod Andrews, Evan Dumouchel, and Margaret Ying Drake for When I Consume You, who, alongside Libby Ewing, deliver a heartfelt family drama about grief and redemption. Ewing and Dumouchel play brother-sister duo Daphne and Wilson Shaw. Troubled since childhood, the two have struggled to find stability as they’ve grown older, and while Daphne seems to have finally gotten her life together, the darkness that’s followed their family all along begins to close in more aggressively than ever before.

A unique urban folktale set and filmed in Brooklyn, When I Consume You confronts the vulnerabilities that people struggle with every day through a genre lens to create a chillingly intimate indie horror nightmare.

The film is written, directed, and lensed by Blackshear, who also produced alongside Andrews, Dumouchel, and Ewing.

WHEN I CONSUME YOU