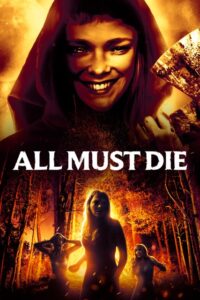 Breaking Glass Pictures is proud to announce the release of the Norwegian bachelorette party slasher feature ALL MUST DIE from director Geir Greni. A Norwegian take on the slasher genre, the film follows a group of women on a bachelorette party weekend. When they decide to play a horror role-playing game, things take a turn for deadly when they begin being picked off one-by-one.

“My mother grew up in the deep woods of Norway. No neighbors for miles and miles. Only trees”, said Greni. “I remember visiting my grandfather and knowing intellectually that we were probably as safe as we could possibly be. Still I always had this little inkling at the back of my mind – what if there is an axe-murderer out there? Hiding in the shadows. The location for this movie is actually the very place my mother grew up, and that has made the whole project extremely personal to me.” 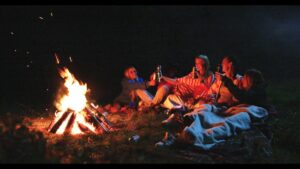 Starring Viktoria Winge, Tinashe Williamson, Julia Schacht, and Marte Sæteren, All Must Die follows Gina, who is about to get married, and her friends “kidnap” her for a last all-out bachelorette party. They have rented a country house up in the woods, miles away from the nearest neighbor. A perfect setting for the horror-themed party. The plan is to give her a proper scare. Dressed in red latex, and all on her own, Gina has to complete a strange rebus. At first it’s creepy but fun. But then things occur that can’t possibly be a part of the game. Or is Gina about to lose her grip of reality?

“This is my first horror-movie, but it will not be my last. I find that the horror-genre is maybe the only place, in which you can really continue to explore the medium of film, and I hope that we have done our best to add to that.”

All Must Die will arrive on Digital, VOD platforms on August 2 including iTunes, Amazon Prime Video, Google Play, Xbox, and Vudu.

Founded in 2009, Breaking Glass Pictures (www.bgpics.com) is a film distribution and media company that focuses on releasing unique and visionary independent films, inclusive of all genres, from around the world. In addition to theatrical, DVD, digital, and Video-on-Demand releases in North America, Breaking Glass functions as an international sales agent in all film markets, as well as a production company dedicated to creating compelling independent cinema. Breaking Glass also facilitates festival, theatrical, and special event bookings, and offers a full-service marketing team (marketing strategy, artwork and trailer creation, PR, social media) to independent filmmakers.

Spooky Season is Here with HALLOWEEN 4 + 5, TRICK ‘R TREAT, & TALES FROM THE DARKSIDE Merch from Fright-Rags

DOLEMITE & Other Xenon Blaxploitation Classics Come to VOD for the First Time!