Latest Feature from Rebekah McKendry (All The Creatures Were Stirring, Bring It On: Cheer or Die) Starring Ryan Kwanten (True Blood) and Oscar-Winner J.K. Simmons (Whiplash) 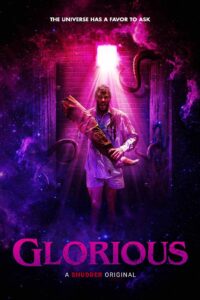 “THE NEXT GREAT LOVECRAFTIAN HORROR”

“THIS ONE IS FOR THE SICKOS AMONG US”

Shudder, AMC Networks’ premium streaming service for horror, thrillers and the supernatural, is thrilled to release the new trailer for the Shudder Original Glorious ahead of the film’s debut on the platform on Thursday, August 18. The latest feature film from celebrated director, podcaster, and academic Rebekah McKendry (All The Creatures Were Stirring, co-writer of the upcoming Bring It On: Cheer or Die) film comes to Shudder hot off of its widely-praised world premiere at the Fantasia International Film Festival.

Glorious follows as, spiraling out after a bad breakup, Wes (Ryan Kwanten) ends up at a remote rest stop miles away from civilization. His situation worsens after he finds himself locked inside the bathroom with a mysterious figure (J.K. Simmons) speaking to him from an adjacent stall. As Wes tries to escape, he finds himself an unwilling player in a situation bigger and more terrible than he could possibly imagine…

With the majority of the film taking place in a rest stop bathroom, Glorious is an intimate indie horror full of twists and unimaginable turns that boasts one of the most jaw-dropping roles of Simmons’ career. Psychedelic, comedic, overwhelmingly messy, and surprisingly emotionally, Glorious has all the makings of a future cult hit. 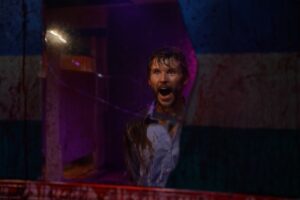 “Glorious speaks to my adoration of Lovecraft, gore, absurdist humor, philosophy, and the type of transgressive movies that leave you thinking I can’t believe I just saw that,” says McKendry. “It is a wild mix of horror, humor, and heady moralistic concepts about our own existential realizations of who we really are, forcing each of us to stare into our personal abyss. And sometimes, the abyss stares back… and maybe has a favor to ask.”

Rebekah McKendry is an award-winning director, writer, and podcaster with a strong focus on the horror genre. She most recently co-wrote the BRING IT ON horror reboot coming soon from Universal. Rebekah began her film career producing heavy metal music videos for Nuclear Blast and Metal Blade and went on to direct many award-winning shorts films and multiple horror features. She has a doctorate in Media Studies focused on the Horror Genre, a MA in Film Studies, and a second MA in Performing Arts Education. Rebekah previously worked as the Executive Editor-in-Chief at Blumhouse Productions and as the Director of Marketing for Fangoria Entertainment. She is a co-host of Blumhouse’s award-winning Shock Waves Podcast and co-host of Fangoria’s Colors of the Dark Podcast. She is also a faculty member of the University of Southern California’s School of Cinematic Arts specializing in the Horror Genre and Directing