It rots. It ruins. It fights to be remembered…

AS DEAD THINGS DO 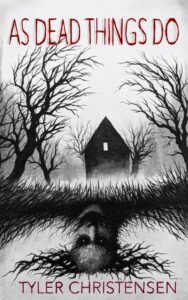 About AS DEAD THINGS DO:

The land has been in the family for centuries, divided and passed down over generations.

Caleb knew when he agreed to move to his husband’s family plot in rural North Carolina that it would come with its headaches. What he never imagined, however, is that their efforts to rebuild a marriage torn apart by infidelity would soon take a back seat to the pale, skeletal thing that haunts the basement. The shadowy figure that moves about in the barn. The hateful blackness just below their feet.

It rots. It ruins. It fights to be remembered…

As dead things do.

The novel is available on Kindle and Paperback on Amazon, Barnes & Noble, and wherever books are sold.

AS DEAD THINGS DO testimonials:

“Tyler Christensen’s As Dead Things Do is a terrifying page turner in every sense of the word. Long after putting it down, I was haunted by the imagery weaved on his haunted loom of a mind. Not since first reading The Shining have I been this affected by a book. Mr. Christensen is clearly the love child of Ray Bradbury and Stephen King.”

“A wonderful debut novel about love, heartbreak, and of course, lots of haunted shenanigans”

-Alyse Wax, Author, The World of IT & Curious Goods: Behind the Scenes of Friday the

Releasing August 6 from Off Limits Press, AS DEAD THINGS DO is the debut novel from Tyler Christensen, a screenwriter and director (House of Purgatory) who grew up in Wisconsin, currently living in Los Angeles with his husband and rescue pup Brom Bones. The only thing more absurd than his obsession with horror and the Green Bay Packers is his Department 56 Halloween Village collection.

About the cover illustrator:

Book cover illustrated by Marc C. Green. Check out his work on his social media.

About Off Limits Press:

Off Limits Press is a queer-owned boutique press specializing exclusively in contemporary horror fiction.
More about the publisher and novels can be found here.

Tom Sizemore Vs Unspeakable Horror in THE PINING